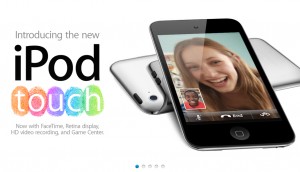 Yes. I admit it. I was one of the 8999 some odd Apple-holics glued to Gizmodo’s live feed of Steve Jobs’s latest star turn in San Francisco today. When that feed melted down, I abandoned that gadget blog and re-fired up my Safari 4 to watch the stage show via the Apple.com site.  Then, somewhere between the hyperbole surrounding the iTouch and whatever was next, the videostream stopped flowing.

Geesh, you’d think with all the cool new functionality added to the iPod family of players, Apple could get this one right. Here’s a tweet mid-stream from paidContent’s Staci Kramer:

Truth be told, between the boffo user stats, e.g., iTouch has a 50% market share of all mobile gaming players here and abroad (more than SONY and Nintendo combined) — and the folksy way in which Mr. Jobs makes each new product enhancement sound like the second coming, today’s event should deliver big time for $AAPL’s many “publics.”

Still, how can I, a lowly PR blogger, compete editorially with Apple’s Twitter ubiquity and live commentary on the event feed and elsewhere? Did you catch the echo chamber of fawning Macbook Pros lined up in the back of that San Francisco auditorium?

Hence, I decided to redirect this blog to another dimension of today’s news: what Apple’s wannabe competitors did to try to thwart or glom onto the Apple’s newsmaking bandwagon. With most Apple prognosticators (correctly) predicting 99-cent TV show-on-demand service, didn’t I also hear that both Amazon and SONY would debut similar streaming video services? Was this BS or PRemeditated efforts to grab a placeholder in the day’s big news, or simply to show the world that they still had skin in the game?

“The Internet retailer has in recent weeks pitched a Web-based subscription service to several major media companies, including General Electric Co.’s NBC Universal, Time Warner Inc., News Corp. and Viacom Inc., among others, according to people with knowledge of the proposal.”

Hmmm. “…people with knowledge of the proposal.” I don’t suppose those people were from Amazon’s PR department, and that the Journal was given a non-attributable exclusive…embargoed to run on the same day as the Apple announcement? Stranger things have happened.

As for SONY, it too stirred the media pot with its own high profile story (also today) on its new audio streaming service with a name surely designed to confound: “Qriocity.” From the Financial Times:

“Sony said it would eventually â€œdeliver a variety of digital entertainment content and services that are ‘powered by Qriocity’, including video, music, game applications and e-booksâ€.

So, I ask: would SONY and Amazon have served themselves better by distancing their VOD dreams from the Apple media juggernaut? Or was the timing of these two stories designed to take the thunder out of Steve Jobs’ mouth…if that’s even possible? I wonder.