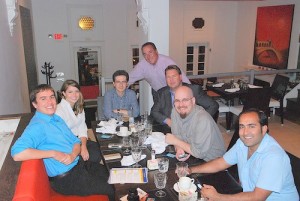 I forgot how much I love Washington DC, especially on a spectacularly sunny day (with low humidity). Bill, Vickie and the gang at the Washington D.C. Convention & Tourism Corp. have so much with which to work. If you make one trip this summer, Washington should be at or near the top of your list.

Talking about blogs, in the four media panels over which I presided yesterday, I raised the issue of blogger influence with top news decisionmakers from NPR, US News & World Report, “Nightline,” Reuters, Dow Jones, USA Weekend, AARP Magazine, “Jim Lehrer NewsHour,” National Journal, and too many others to mention.

All recognized the urgency in migrating their respective content online — not just text, but multi-media as well. (AARP Magazine included.) U.S. News even deployed Alex Kingsbury on a reporting mission to Iraq with a hand-held digital video camera. The video was used on the magazine’s website.

However, few of the editors saw blogs as an important source for story generation. One TV producer sanguinely put PR pros in their place when it comes to pitching stories. The “NewsHour” producer stated that “less than a half percent” of that program’s segments originate with the help of a PR person. (Gee as both a blogger and PR practitioner, I guess that’s two strikes.)

I remain undaunted especially after attending the Geek blogger dinner last night. These meet-ups have become kind of a tradition at conferences like these. We had lots of PR blogging authority on hand last night.

Hopefully, I’ll find time to chime in later with another report.