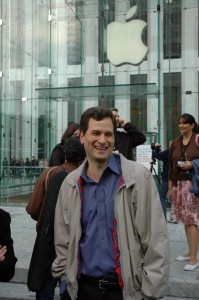 Renaissance gadget guy David Pogue is one very bright and entertaining fellow. In fact, he can be downright hilarious, plus he has a real New York sensibility.

Yesterday he delivered a rousing PPT (is this an oxymoron?), infused with video, that kept hundreds of PR types wired to their seats at the Bulldog Conference in DC. While some of his digs at the profession flew over the heads of the audience, others aimed at one Redmond, WA company squarely hit their mark.

The prolific Mr. Pogue, consumer electronics columnist, blogger and vlogger for The New York Times and elsewhere, prognosticates on PR 2.0, social media and Web 2.0. The quality of the audio is OK, though I missed the first 20 seconds.

Nonetheless, what Pogue pragmatically professes and portends makes it a worthwhile listen — if you happen to have an hour (TRT: 61.42). (It may take a few seconds to load.)