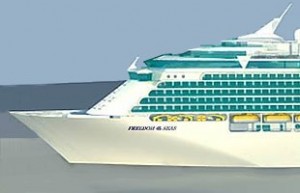 According to the client leader from Weber-Shandwick, planning for the U.S. arrival of the world’s largest cruise ship was two years in the making. Having personally helped lead the same NY Harbor arrival to introduce the then “world’s largest cruise ship” from the same cruise line over a decade ago, I read with some interest the contrasting accounts that appeared in today’s New York Times and New York Post (print edition only).

For the Times story, the agency somehow inserted itself and its PR doings into the copy, i.e., “a nautical publicity stunt coming in from sea.” For the latter, the ship was front and center with a fab photo and a prominent rundown of all this vessel has to offer. “LET FREEDOM RING: World’s Biggest Liner Hits Town” blared the headline in the Post.

No journalist wants to hear about positioning for the best photo angle or the other media outlets planning to cover the story. In fact, the moment one senses that he or she is witness to “a PR event” (i.e., being manipulated), the hype-alarms sound and the best laid plans veer off course. The PR propeller should always remain below deck since it will invariably detract from the real story — in this case, a spectacular feat of nautical engineering with unsurpassed amenities and mind-boggling specs.

I wonder what the client thought when the agency seeped so prominently into the Times story? Step aside I say and let that ship make its own news waves. It certainly has all the media buoyancy it needs to do so.