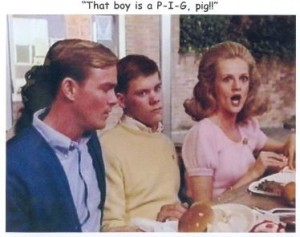 During the I. Lewis Libby trial, the office of the Veep revealed its strategy for selecting media for interviews, i.e., those most susceptible to echoing the White House’s messaging.
Surprisingly, NBC’s true political insider Tim Russert headed the list. (I would have thought Larry King, but what do I know about Beltway spin?)

Anyone who reads Frank Rich’s column with any regularity or who paged through his book, The Greatest Story Ever Sold, will know that “command and control” reigns supreme with the Bushies, at the expense, of course, of transparency and openness. Hence we come to a little item that will be buried tomorrow — overshadowed by the Gonzalez extended family’s maneuverings to avoid self-incrimination.

The White House today revealed the names of the three universities where the U.S. President will deliver this year’s commencement addresses. They are…drum roll please…Harvard, Yale and Columbia. Can you believe it???

Well, no. Not really. Instead, Mr. Bush plans to address the colleges he rightfully should have attended had it not been for his family legacy: Miami Dade College (Kendall Campus), St. Vincent College (in Latrobe, PA) and the U.S. Coast Guard Academy, prep for the military branch presently embroiled in a financial travesty over a botched order for swifter boats.

I can understand the choice of St. Vincent, which is run by the head of Mr. Bush’s faith-based initiative. It sits in the district represented by Congressman (and war veteran) John Murtha, one of the Iraq War’s fiercest critics. The Coast Guard Academy also makes sense from a rah rah, photo-op perspective. But Miami Dade. Hmmm. I guess the University of Florida wasn’t an option given that university’s big-time diss of the taller, smarter son of George H.W. Bush.

Hey, I got it! Here are Miami Dade’s incoming freshman enrollment stats:

Now here’s a student body that will actually understand what the President is talking about. Hey, the school does have an Ivy League-caliber chess team.