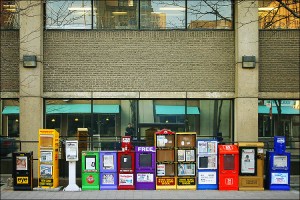 Between spectating at high school sailing regattas and 9th grade and college lacrosse games, my weekends are pretty much shot.

Even so, it’s over the weekends when I come across some of the more compelling content (I mean journalism) in the digital domain. Perhaps the weekend’s added leisure time allows the blood to flow back into brains of the online punditry.

I’ve been following one discussion on the fate of newspapers posted on Saturday on Doc Searls’ weblog. It opens with Tim O’Reilly ruminating on the sad state of affairs at the San Francisco Chronicle, then goes on to cite Dave Winer’s remedy for what ails the vital vestiges of an ailing (changing) industry. I was taken by Mr. Winer’s objection to the use of the word “content:”

“Stop calling everything ‘content’. It’s a bullshit word that the dot-commers started using back in the ’90s as a wrapper for everything that could be digitized and put online. It’s handy, but it masks and insults the true natures* of writing, journalism, photography, and the rest of what we still, blessedly (if adjectivally) call ‘editorial.’ Your job is journalism, not container cargo.”

Of course, just as my brain got its synapses around a Utopian world of newspapering (think distributed editorial), I had a Monday morning wake-up call from The Times’s Kit Seelye who offered this sobering assessment:

Revenue from advertising was in striking decline last month, compared with February a year ago, and were generally weaker than analysts had expected.”

She went on to quote a Jupiter analyst:

“There is absolutely no question that the next 10 years are going to be really bad for the newspaper business. This is a time of wrenching change and chaos. All of our assumptions about newspapers are going to be changed. The format, the business model, the organization of newspapers have outlived their usefulness.”

Still, online revenue growth — admittedly a small part of total revenue — is booming. Could this be the impetus for those who clamor for newspaper ownership or is it simply an ego-driven power grab? Take Sam Zell. According to today’s Journal, he has the beat on The Tribune Company, and is more bullish than others. The Times reports:

“He called himself ‘an opportunist’ last week in an interview with The Associated Press, adding, ‘I probably am not as pessimistic about the future of the newspaper business as others might be.'”

Still, to deal with the problems the industry faces, newspapers do need to innovate and experiment, and experiments come with built-in risk. Newspapers are a fundamentally conservative industry, one that will innovate only at the point of a gun. But even with a big gun pointed at the business, most of the weapons at The Times seemed to be pointed inside.