Anyone who has ever worked in an agency has had some exposure to the business development process. After all, without topline growth, how can agencies sustain themselves?

I’ll always remember how one agency for which I toiled invited a highly touted outside consultant to help re-vamp the agency’s new business prospecting and acquisition processes. A group of us spent a half-day session with this new biz guru running through a series of exercises. As is often the case with these kinds of sessions, I emerged with but one compelling takeway that has stuck with me to this day: branding.

The consultant demanded that we add a catchy title to every initiative we intend to present in our new business proposal. Not unlike the insidious work of Frank Luntz whose phrases like “death tax” and “climate change” were fabricated to reframe the public perceptions of the terms “estate tax” and “global warming,” respectively, adding clever branding to an initiative can often help create self-fulfilling prophesies.

Take “Cyber Monday.” It took years for Black Friday to earn its place in the American lexicon according to Wikipedia:

Cyber Monday is a more recent phenomenon wherein consumers allegedly take to their digital devices to shop online until their fingers fall off on the Monday after the long Thanksgiving weekend. CNN’s John Sutter reports that “‘Cyber Monday’ is Mostly Myth”:

“The only problem: It’s mostly a marketing gimmick, according to consumer electronics experts and an online metrics tracker. Cyber Monday has never been the biggest day of the year for online retail sales, said Andrew Lipsman, director of industry analysis at comScore, a company that monitors internet traffic. Typically, a Monday in December takes that title, and Lipsman predicted the biggest online retail day of 2010 will be on December 13.” 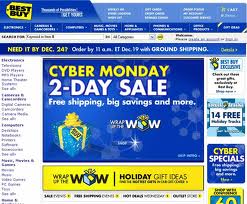 Still, like its bricks & mortar predecessor Cyber Monday, a term purportedly created by the National Retail Federation, may very well one day live up to its name.

“Ellen Davis, vice president of the National Retail Federation, which owns CyberMonday.com (and Shop.org), said the ‘Cyber Monday’ term originated organically as retailers noticed that consumers turned to the internet to shop on the Monday after Thanksgiving. ‘The trend was actually developed by shoppers and started in ’02, ’03,’ she said, adding that the federation just put a name to the concept.”

Ah ha! The Federation just “put a name to the concept.” Smart, me thinks. And as Cyber Monday works its place into the popular lexicon, online retailers will be sure to deliver the goods as more and more online shoppers boot up on the Monday after Thanksgiving to find the digital deals. I give it two years (if that) for Cyber Monday to live up to its promise of being the biggest online shopping day of the year.