Between Trump and the GOP’s disregard for the truth, and the unwillingness of the major social platforms – Facebook, YouTube, and Twitter – to remove provably false or purposely doctored information from reaching its users, America is poised for a whole lot of hurt in 2020.

Now comes the news, thanks to some nifty reporting by Buzzfeed, of how some public relations firms are offering services that leverage the flaws in how the world gets its news and information. In its piece “Disinformation for Hire: How a New Breed of PR Firms is Selling Lies Online,” the authors write:

“If disinformation in 2016 was characterized by Macedonian spammers pushing pro-Trump fake news and Russian trolls running rampant on platforms, 2020 is shaping up to be the year communications pros for hire provide sophisticated online propaganda operations to anyone willing to pay. Around the globe, politicians, parties, governments, and other clients hire what is known in the industry as “black PR” firms to spread lies and manipulate online discourse.”

In my January 2017 piece “When PR Turned to the Dark Side,” I highlighted the beginnings of this dangerous trend, but held out some hope that the industry, driven by PRSA’s code of ethics, would not succumb to the unscrupulous tactics deployed by a growing cadre of nefarious actors. I’m now beginning to believe that even the most respected journalistic enterprises do not have the capacity to prevent tainted information from polluting the public discourse.

Facebook, which is arguably the most duplicitous propagator of disinformation, this week announced that it will ban “deep fakes” from its platform (but at the same time, wouldn’t remove the Nancy Pelosi video that was purposely doctored to look like she had a bit too much to drink). One begins to wonder whether these pronouncements are more PR than actual, enforceable policy changes. From Monika Bickert, Facebook’s Vice President, Global Policy Management:

“Today we want to describe how we are addressing both deepfakes and all types of manipulated media. Our approach has several components, from investigating AI-generated content and deceptive behaviors like fake accounts, to partnering with academia, government and industry to exposing people behind these efforts.”

To its credit, the Buzzfeed investigative team learned that “…since 2011, at least 27 online information operations have been partially or wholly attributed to PR or marketing firms. Of those, 19 occurred in 2019 alone. 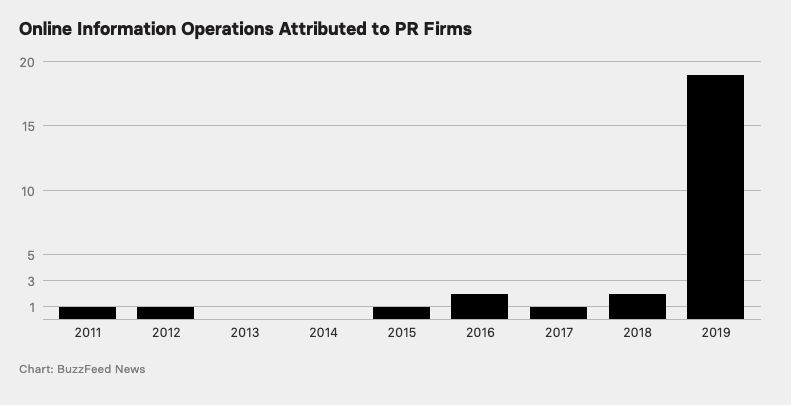 While the Buzzfeed report does not cite any of the big-branded U.S.-based firms as practicing the dark art of news and social media manipulation, I wouldn’t be surprised if there are entities within these orgs that deploy some of these tactics.  These include:

Peng Kuan China Taiwanese-based operative’s “Content Farm Automatic Collection System” that he “developed for manipulating public opinion. He told the Reporter, an investigative news site in Taipei that partnered with BuzzFeed News for the story, that automation and artificial intelligence “can quickly generate traffic and publicity much faster than people.”

The Archimedes Group, an Israeli black PR firm, created networks of hundreds of Facebook pages, accounts, and groups around the world, boasting on its website that it would “use every tool and take every advantage available in order to change reality according to our client’s wishes.”

In Poland, Cat@Net managed networks of fake Twitter accounts operated by staffers with disabilities working from home, whom the agency hired because it could pay them below-market rates while they received government subsidies.

And, of course, there’s that Russian troll farm, harmlessly named “The Internet Research Agency,” which pumps out divisive, anti-Western disinformation from its offices in St. Petersburg. Separately, The Guardian’s intrepid Carole Cadwalladr reported on the release of thousands of pages of documents from Cambridge Analytica that prove just how pervasive disinformation has become and the deleterious effect it has on democratic elections worldwide. It broke over the holiday weekend and was all but forgotten on Monday.

We’re already aware of how many agencies, on behalf of their clients, create buoyant-sounding, opaque organizations to advocate on issues that benefit their clients, but with which the client does not wish to be publicly associated. What we haven’t seen yet is whether any of the more-established PR agencies have succumbed to the purposeful dissemination of disinformation to achieve the same result. Somehow I think it’s already happening.