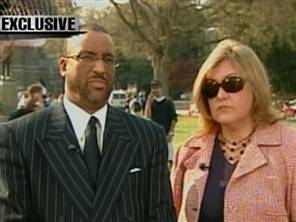 It goes from bad to worse. Following news late last week and yesterday’s New York Times front page story, I’ve been catching bits and pieces of the rape allegations against the Duke lacrosse team. This included an appearance by lawyers for two team members this afternoon on MSNBC-TV. If there was ever a reason to refrain from doing media interviews until the facts are in, this is it.

Sure, have the college president address and update the media on the crisis that envelopes his institution, but that’s it. Here’s the interview with these two rudderless lawyers. Not only were they inarticulate to the point of unintelligible, but honey, lose those sunglasses!

I think these lawyers opted to get some high profile TV time, rather than protect their clients’ interests. It certainly didn’t do much for the reputation of an esteemed university. Net net (excuse the pun): this story is spiraling out of control. Even The AP chimed in with a commentary. At least the lacrosse team roster was removed from the school’s website.