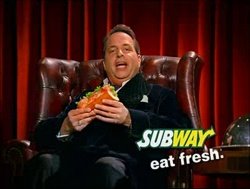 Who could forget the hoax perpetrated on Wendy’s in which a human finger was transplanted into one of the QSR’s tasty entrees? The hoaxers landed jail time for their reputational assault on the #3 burger chain.

This weekend we learn of another finger-like additive found in a Subway sandwich.

I suppose without the chain’s heavy-weighted TV campaign featuring the pudgy Jon Lovitz distorting the trademarked “Eat Fresh” slogan to sound like “Eat Flesh,” this blogger wouldn’t have lifted a finger to digitize an item on this brisk sunny Saturday in New York. But I couldn’t resist.

What’s more, the Subway chain has re-energized its brand by marketing its fare as weight-reducing and nutritious.

Here’s the brand-detractive quote from the (unauthorized) Subway worker in response to the finger find:

“‘It looked like a thick piece of fat,’ she told The Fresno Bee. ‘It doesn’t look anything human to me.'”

PR lesson learned: try not to let the counter girl talk to The Associated Press.