Kindle sticks it to Apple’s iPad with its new TV spot. I wonder how Amazon will deal with the product enhancements Apple released today – multi-tasking, printability…?

The big news this week from the social spheres entails Twitter’s simple redesign and enhanced functionality. Not only is the company creating cache and demand by rolling it out slowly to the anointed few, but it launched the new site by inviting some select influencers to its headquarters for the first demo. Fortunately, we had our trusty go-to guy, The Scobleizer, as Johnny-on-the-spot with his digi-cam feeding live via UStream. For some reason, the video was not embeddable, so click here to view. 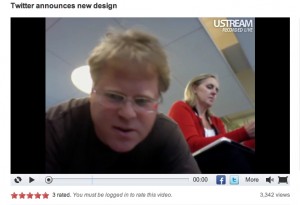 Khoi Vinh, former design director at NYTimes.com, talks about design and news to a gathering in Zurich, Switzerland. (via NY Observer)

This could be the worst interview ever. Providence Mayoral candidate Chris Young talks with (sings to) a local TV talk show. (Via Village Voice; H/T to Richard Newman who assured me that The Newman Group had nothing to do with the media prep on this one.

Back to the Future with Steve Jobs

Steve Jobs cuts his teeth on the big stage, circa 1984, to debut the Macintosh. Fun to see the Apple hyperbole in its formative stages, i.e., “Insanely Great!” (Maybe I should have saved my Mac LC (Motorola 68020 processor) on which my three sons cut their teeth with apps like KidPix, MathBlaster, Reader Rabbit, etc.? (h/t Beantown video man Steve Garfield via Techcrunch.