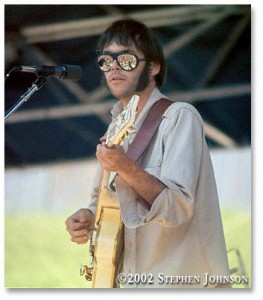 We took the hour-long drive to the dilapidated stadium, now long demolished, to catch one of the most popular and politically active musical acts of an era that was filled with politically active entertainers. CSN&Y’s “Ohio”, “Almost Cut My Hair,” “Teach Your Children” and many others were anthems for America’s youth, I among them.

After years of the mega-group denouncing Mr. Nixon at protest rallies, concerts, in their music and media interviews, this night was different. During a break between songs, Graham Nash approached the microphone to proclaim that the nation’s nemesis had announced his resignation. Someone in the front of the stage waved an American flag. Mr. Nash leaned over to collect it and then carefully drape it over the piano as if to say it was OK to love our country again.

The Times reports today that one of the iconic members of that band, Neil Young, is “rushing an album” into release “ruminating on the war in Iraq and directly calling for the impeachment of President Bush.” Unlike six retired generals calling into question Secretary Rumsfeld’s leadership (or lack thereof), the administration will be hard-pressed to message and mobilize its “talking heads” to counter this rock legend’s point of view. (David Byrne wouldn’t go for it anyway.) Maybe they can media train and enlist Jessica Simpson?

In either case, the power of celebrities to generate public awareness…and media coverage endures to this day. It’s unfortunate that these legendary and still active bands aren’t afforded the “airtime” they once commanded. Perhaps we need a few more Kanye Wests?