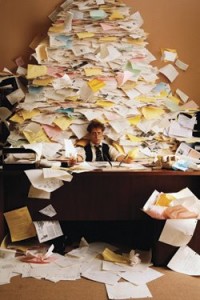 My wife had had enough. Our #1 and #2 sons will be home from college soon and we needed more space for their stuff. For years, she’s had her eye on the dozen or so boxes that contained “my life’s work” (as I put it). Today my pleads for preservation went unheeded. “Too bad” was her reply.

Into the dumper went all the paper, pics and videotapes chronicling years of painstaking PR work for these clients and others:

I’m feeling kinda melancholy right now. I suppose there’s some satisfaction knowing that much of this history resides somewhere in the digital domain waiting to be discovered through search. And then again, maybe not.