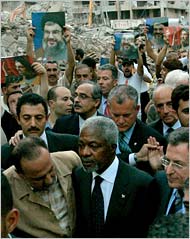 Talking about terrorist tools, did you see the picture of Kofi Annan leading a group of Hezbollah supporters through the rubble in Lebanon? Though he was booed, the image speaks a thousand words.

When will we see this terrorist apologist make a public appearance in one of the Israeli villages whose women and children were attacked by Hezbollah, Mr. Annan’s apparent sponsor in Lebanon?

Granted, the U.N. Secretary General did “meet with Israel’s leaders and the families of two Israeli soldiers, whose abduction by Hezbollah militants sparked the 34-day conflict in Lebanon.”

Let’s see if those photos are released. Thus far, the only thing that came out of that meeting was this AP story titled “Annan: Israel responsible for most of violations.”

His next stop: Syria and Iran — Hezbollah’s main benefactors — with a friendly visit to Ramallah worked in.