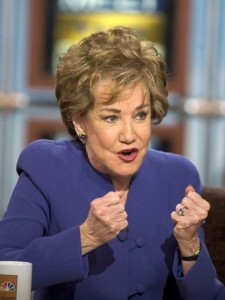 At the recent Time Warner Politics 2008 Summit here in New York City, it seemed like every panel eventually touched upon media bias and the responsibility mainstream news organizations have to ensure objectivity.

At one point, Vanity Fair‘s progressively minded editor Graydon Carter proclaimed that The New York Times is the greatest newspaper today and we’d be lost without the balance that The Times seeks in its reporting (or something to that effect).

I was tempted to ask a question that’s been gnawing at me since the beginning of the election cycle. What responsibility does the business side of broadcasting have in validating the veracity of the political advertising it accepts? Maybe I’m being naive, but shouldn’t television’s “standards and practices” departments reject a TV spot when it clearly crosses into fiction territory?

Take for example this latest spot from Senator Dole of North Carolina (pictured). In it, she calls her Democratic opponent “Godless” and even dubs the sound bite “there is no God” over her adversary’s photo as if it was said. North Carolina’s local TV stations accepted Senator Dole’s dispicable and malicious spot…in spite of the fact they her opponent is a Sunday school teacher and serves as an elder in her church.

Sure, I know TV stations are in desperate straits nowadays and need to suck in as much ad revenue as possible before the political windfall ends. But where are the standards here? Where is their integrity? What is their responsibility to their viewers?

In business, when a company has been maligned by a competitor’s ad campaign, it can file a complaint with the Federal Trade Commission. In politics, and especially during a recession, there is apparently little recourse. Do Americans have only the free media on which to rely to separate fact from fiction?

But you know something? Maybe there is a God. The Internet will eventually disintermediate these spineless local TV news operations.