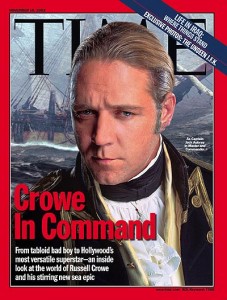 This blog frequently looks at the machinations of those PR types toiling in the netherworld of celebrity and gossip. Invariably, we explore the news from the perspective of the publicist-in-charge, or at least the best-guess thinking behind the PR decisions. Rarely do we get inside the head of the celebrity as client.

My PR friend down under, Paull Young, on whose podcast I recently had a chance to chat about getting one’s feet wet in PR, forwarded me a link to a bizarre piece from the Sydney Morning Herald about the wonderful world of Russell Crowe. Next to Paul Hogan, Mr. Crowe is Australia’s most famous, if not most misunderstood, personality today. (Of course, we New Yorkers know him best for his phone-throwing temper tantrum in a New York hotel.)

In the rather lengthy story, the reporter recounts his dance as journalist-turned-PR rep for Mr. Crowe, and specifically the actor’s “master and commander” approach to managing the media.

“And it was during these times that I saw evidence of something that made me wince – Crowe’s bizarre propensity for nickel-and-dime media manipulation. It seemed Russell was running his own parallel, one-man PR fix-it campaign. It was much the same as my own, but he was pitching himself to journalists while I was handling his CD. He’d go through the daily papers and call journalists in person, chastising them for perceived inexactitudes. There was nothing morally corrupt about this, but I found it a silly pastime for a man of his stature. Sometimes it did him no service at all.”

It seems that in exchange for hospitality and access, the actor was able to incur favor from a range of (star struck) journalists:

“He once bragged to me about how he had called a prominent Sydney gossip columnist who had been dumping on him, promising her that should she publish a positive word or two, he would grant her an exclusive interview. Like magic, a nice mention appeared in her column the following week, and the exclusive interview followed. It was doubtful, I thought, this transaction hadn’t been noted by the columnist’s peers, who’d consider her weak and Russell quite the meddler. If he needed an answer for why so many journalists disliked him, I thought, he need look no further.”

As we observe the bidding war for photos of that baby, the tear-filled two-for-one Britney exclusives on “Dateline” and “Today,” or Jen and Vin’s tango in Paris, it’s important to maintain some sense of perspective on how PR pros and journalists relate to one another most of the time. Thanks for the tip, Paull.