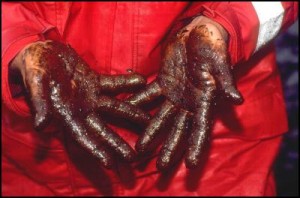 Earlier this week, this blog echoed the report on the Pentagon’s intended hiring of an ABC-TV newsman to “show progress in Iraq” through “better press relations.”

Yesterday, in a not-unrelated post, Kevin Grandia, writing on desmogblog, astutely pointed out how ExxonMobil’s words don’t gibe with its actions when it comes to the issue of global warming.

[Exxon chief spokesperson] Kenneth Cohen stated that Exxon was not a “climate change denier” and “wanted to play a constructive role in countering global warming.”

…with its (under-the-radar) funding of think tanks and associations that would be considered “climate change deniers.”

“Last week Cohen was in London playing a bit of PR offense for the oil giant. He went after Greenpeace for their recent report outlining the funding in 2006 that Exxon provided to 41 think tanks and associations.”

Granted, ExxonMobil is a big company — the biggest, in fact — but when its policies contradict its desired public positioning, even the most savvy PR person will fail to prevail in the court of public opinion.