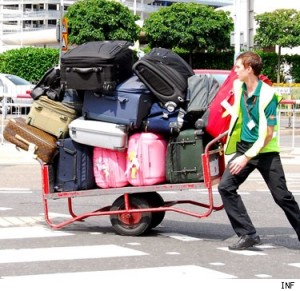 “NBC News has not and will not pay for interviews,” spokeswoman Allison Gollust said. NBC News also denied that NBC Universal CEO Jeff Zucker had called Hilton’s father, Rick, to lobby for “Today.”

The Post reported that NBC News was prepared to pony up a million bucks. Here’s what its checkbook journalism might have bought:

Meredith: So, Paris, how does it feel to be free?

Paris: I’m so excited. Being in jail was worse than being holed up in the VIP room at Teddys.

Meredith: What was your bleakest moment?

Paris: Ummm. Let me think. What does the word bleak mean? Oh I know. The second I realized the bed linens had a thread count of less than 1200.

Meredith: What are your plans now?

Paris: Well, let me see, first I want to get my Bentley repaired. And then, I’ll go back to work collecting fees to appear on ET, Access and Extra.

Meredith: How did you feel when the judge ordered you to return to prison?

Meredith: Has the time you spent in jail taught you anything?

Paris: Yes, duh. I saw how the other half lives and I still don’t like it.

Meredith: Thank you for your time.

Paris: You’re welcome. It was worth it.