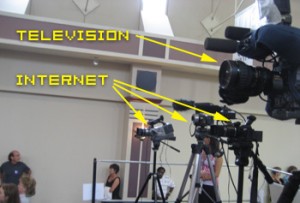 With a lot of huff and puff, the folks at the Huffington Post this week revealed the name of the Jay Rosen-inspired political journalism initiative that aims to give voice to a quasi-cohesive group of citizen reporters on the Presidential campaign trail (of which you can be part). From Arianna:

“We’re calling it Off The Bus (OffTheBus.Net), a name that captures the essence of what we’re looking to accomplish. Our disparate mix of citizen reporters won’t be part of the mainstream pack covering the campaigns — and will come at it from a wide range of different angles and perspectives, adding a new dimension to campaign journalism. Click here to sign up to become one of them.”

Separately, but definitely related, a Greenville, SC TV news cameraman named JL Watkins, who blogs under the name of LL Robot (as in Little Lost Robot) reports on the citizen journalist phenom surrounding Barak Obama’s recent visit to his state. In it, he makes these observations:

“My Friday assignment was to photograph all the political action as Barak Obama talked before a reported crowd of 3500 (they expected 1500). The event went rather smoothly, despite the really late start. But the actual reason I was posting this was to point out all the non-traditional media on the platform. And at one point, I was outnumbered by people shooting for websites.”

Personally, I’m enthralled by the prospect of a presumably richer portrait of those who aspire to lead this nation. At least we’ll get past the recycled sound bites that appear in the finite news holes of the mainstream media (but not necessarily their sister websites.)

From a PR perspective, however, I wonder about the scalability of the credentialing process, and more specifically, who gets them and who doesn’t. By laying down the gauntlet early, do Jay and Arianna hope their now-branded band of bloggers will be given access to the hallowed halls traversed by campaign insiders? (The bet is they don’t need it.)

If not, will the audience for these citizen reports be captured via MOS’s and local sidebars? What about the Little Lost Robot? If you were a campaign PR director, where would you draw the line when staring at a press riser that measures a meager 20′ x 8′?

Don’t misunderstand me. The democratization of campaign media coverage is a most worthwhile, if not extraordinary development — especially for people who like restaurant menus with five pages of entree choices (and have the patience to peruse).

I usually opt for the highly-rated (and credible) restaurant offering a hand-picked selection of just a few (mouth-watering) specials. Think NPR, “Jim Lehrer NewsHour,” or The Week magazine. But then again, those grassroots reports from the campaign trail might just end up on five-star restaurant’s menu, e.g., the roast Macaca special.