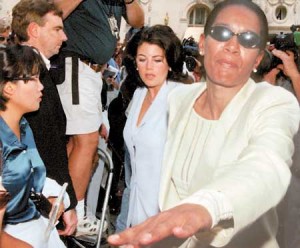 So, Ms. Smith, how do you explain the hundred thousand dollars in cold cash stashed in your client’s freezer?

Today, it’s being reported that U.S. Rep. William Jefferson, the Congressman at the center of the storm over alleged Congressional corruption, Executive Branch power grab, FBI entrapment, and other sordid misdeeds in the Beltway, has retained a “crisis-seasoned PR aide” to “do a better job responding to the allegations against him.”

Judy Smith, a lawyer herself, will enjoy attorney-client privilege as she hopes to “work her media contacts” to get out “the other side of the story.” Her credentials include defending the reputations of Justice Clarence Thomas during the Anita Hill imbroglio at his confirmation hearings, the Saudi government post-9/11, the relatives of Rep. Gary Condit’s mistress Chandra Levy, and her PR kingmaker client, Monica Lewinsky, whom she gloriously led past the hordes of reporters to testify against Bill Clinton.

There are some PR firms that are associated with the right side of the political spectrum, and others with the left. Most of the large full-serve PR firms have rainmakers and counselors on both sides of the ideological fence.

I can’t figure out where Ms. Smith allegiances lie given her client history, but I do know that the famous words whispered by one Mark Felt have a role somewhere to play here, i.e., “just follow the money.”