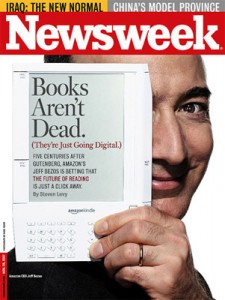 Two related items today: one new, the other old, but still fresh. Who hasn’t heard of Kindle? If you answered in the affirmative, go back to Bulgaria. Truth is: the PR folks at a resurgent (buzzworthy) Amazon did a fine job to get the word out on the company’s new book, blog and periodical electronic reading tablet.

(There’s just something about how a mainstream exclusive with Newsweek‘s Steven Levy, alongside some live blogging of a Jobsian-like launch event can kindle a viral flame.)

Now that the fire is 25% contained, we enter the post-intro phase of Kindle’s boffo debut, namely, Robert Scoble’s less-than-effusive (though perhaps nit-picky) video review, which I stumbed across from a twitter post by Jeremiah Owayang pasted onto the blog of client Aaron Strout of Mzinga (formerly Shared Insights).

Here’s a sound bite from Scoble’s post that unequivocally sums up his impression:

“Whoever designed this device should be fired, and fired now.”

(Hint: it has a little something to do with ergonomics and networkability, for starters.)

Moving on, we turn to David Carr’s very relatable column in today’s New York Times in which the astute observer of all things media extols the virtues of a, God forbid, weekly print magazine. Not just any magazine, but The Week, on which this blogger waxed poetic nearly two years ago.

The editors of The Week aggregate and publish on paper their take on the week’s most important news and feature stories culled from a range of respected journalistic sources. At a time when the media powers-that-be are extending their brands online to hedge the offline migration of ad dollars, The Week‘s formula apparently has struck a resonant chord:

“A success in Britain, the American version of The Week has posted double-digit growth in the last eight reporting periods of the Audit Bureau of Circulations. It has hit a nerve, coming at a time when the familiar American newsweeklies are struggling to maintain their footprint. Newsweek, for example, announced this month that it was cutting almost a fifth of its circulation, dropping its rate base from 3.1 million to 2.6 million.”

In pondering the incongruity of it all, I turn back to Kindle. Can an A-list blogger with loads of online tentacles snatch the wind from Kindle’s sails that have been propelled by headlines like this one from ABCNews.com:

“Will Kindle Be the Next iPod? A Digital Book Reader From Amazon.com Has the Potential to Create a New Market.”

Can traditional magazine publishers learn a thing or two from The Week‘s aggregated approach to paper publishing? (Think print versions of CondeNet or Pathfinder, may it rest in peace.)

Finally, that $399 thing that Scoble’s holding in his hands doesn’t inspire me either.