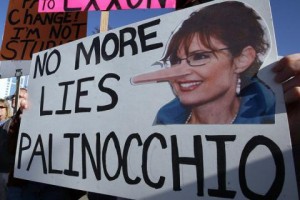 As you set out on this historic day, you may wish to read the urgent plea Stanford University Law Professor Lawrence Lessig posted on the eve of the election. It recounts where we were at this time in 2000 and 2004, and the dangers of complacency.

Lessig, like many of us who choose the future over the past, is worried. I can’t blame him.

It started yesterday with a scurrilous email my sister forwarded to me (and to all her online buddies) that had her nearly convinced that Islamists are behind Sen. Obama’s political journey. I searched for the facts and replied to all with the link, chastising her for succumbing to these Republican-fueled fabrications. I included the Fight the Smears link for good measure.

Then David Kurtz over at TPM picked up on Sarah Palin’s last ditch effort to swing some votes her way by releasing late yesterday her own version of Troopergate. (It exonerated her on the basis that she was not responsible for her husband’s actions in the firing of that state official.)

Mrs. Palin aides also released her long-promised “medical records,” which consisted of a two-page letter from her physician saying she is in excellent health. What’s missing of course are any details of her having given birth. Fat chance we’ll ever see that.

Timing is everything in PR, as we know, so in spite of a 24/7 news cycle, yesterday was the last viable time for the retro Palin-McCain ticket to connect with a voting block that is anything but wired.