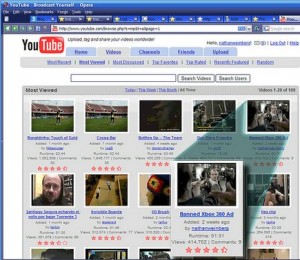 My friend and sometimes collaborator Andy Plesser is in northern CA to capture for his burgeoning beet.tv vlog sound bites from a who’s who of new media pundits and pontificators gathered at Tony Perkins’ Always On Summit, which starts this evening at Stanford University.

No doubt the virility and virality of online digital video, as a marketing vehicle, will continue to capture much of the conversation. From a PR industry perspective, we’re at a crossroads. Does commercially produced or commercially incented, but consumer-generated (and syndicated) video fall into the PR pro’s playbook, or will the Crispin Porters and specialized video boutiques of the world capture the lion’s share of this exploding category?

Business Week weighs in with a piece that reports on the trend of some video hosting sites charging for the right to post video. This follows the news of the big entertainment content providers striking strategic partnerships with the more dominant sites as a means to whet TV (or IPTV) viewers’ appetites for their full fall fare.

It begs the question: which video submissions require payment to their host and which do not. Which are in the advertiser’s domain and which fall into PR? I wonder what would happen if local broadcast TV news directors charged outside video producers a fee for to air their footage on the local newscast? The line between advertising and PR content blurs.