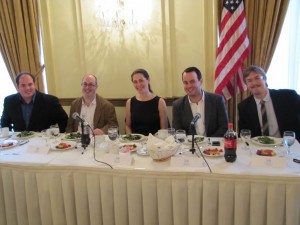 Let’s face it. As ubiquitous as the term social media has become in the PR person’s lexicon (and hopefully client programs) the majority of pros still continue to engage journalists as part of their core service offering.

Many (mistakenly) believe that “blogger engagement” falls under the social media rubric, when in fact, it resides squarely in the traditional PR realm, albeit with a nichified, if not quirkier media channel. (On the other hand, the creation of corporate or special interest blogs do qualify as bone fide social media endeavors.)

For the last ten years or so, I have presided over the Publicity Club of New York. Our mission has evolved, but the core goal of enlightening PR peeps to work more effectively — and less annoyingly — with the “media channel” has persevered. Recently, I began to ponder whether the advent of social media would relegate the words “publicity” and “publicist” into the PR lexicographer’s graveyard. I mean doing “publicity” just sounds anachronistic, doesn’t it?

Yet, after every one of our luncheons, which feature top-tier journalists of all stripes and flavors, I’m reassured that the art of pitching/engaging/enticing reporters, bloggers, producers and individual “influencers” remains a vibrant, vital and valued dance — from both sides of the media relations equation.

In March of 2005, a month before this blog was born, PCNY featured a panel of up-and-coming bloggers, all of whom are A-listers today. A year and-a-half later we hosted a group of tech influencers. Our most recent panel featured leading broadcaster producers from “The Takeaway” to “GMA.” And in September, we heard from some of the new breed of influencers/conversation catalysts (pictured left to right): The Times’s Brian Stelter, paidContent’s David Kaplan, Mediaite’s Rachel Sklar (who’s kinda sore at me right now…long story) HuffPost’s Danny Shea, and The Business Insider’s Nich Carlson.

I tell you this because we digitally recorded all the insights these journalists shared with the 100-150 NY PR pros that typically attend our luncheons. So if you have some time over the long weekend, I encourage to visit this page on the PCNY website. Down the right column are the panels we’ve hosted with links to the audio of each panelist’s opening remarks.

Heres to better media pitching, I mean engagement, I mean dialogue. Whatever!