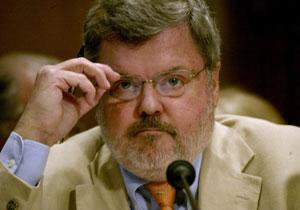 Ken Tomlinson’s resignation from the Board of the Corporation for Public Broadcasting (the CPB), overseer of PBS and NPR, was announced this evening. It comes in advance of the imminent release of an investigation by the Inspector General into Mr. Tomlinson’s alleged partisan practices while heading the CPB. (He’s the guy who hired some like-minded friends to ferret out the supposed liberal bias on PBS.)

Of interest to me was Mr. Tomlinson’s condemnation of the report prior to its release. Apparently, it’s going to be somewhat damaging to his reputation, so he reasoned that by flagging his distaste for the findings, he might just neutralize the deleterious impact it will have. Geesh. If anything, by citing the report as part of the news of his resignation, he has only succeeded in whetting the media’s appetite for schadenfreude.

Of additional interest to me, from a PR perspective, is the attention Mr. Tomlinson’s successor, a former Republican National Committee co-chair, received when she filled her first three “senior staff positions.” Their titles: VP of Government Affairs, VP of Communications and Senior Director of Corporate Communications, respectively. Three PR people. Republicans all. No bias there.