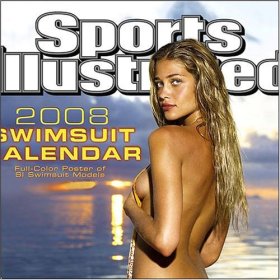 “Thereâ€™s never been a time in which the future of journalism was more fraught than it is now.“

I assume he’s alluding to the blurring of news commentary and journalism. Or maybe it was that internal memo from the #2 man in The AP’s LA bureau: â€œNow and for the foreseeable future, virtually everything involving Britney is a big deal.â€

But there’s another blurring going on as Raines’s future co-media pundit Jeff Bercovici points out today when he accuses Esquire magazine of breaching the wall between church and state by allowing a lingerie advertiser to own the editorial of a model photo shoot.

“But even more than that, it’s the nakedness of this particular quid pro quo. These women were invited here to sell magazines, and they came to sell underwear. For the space of nine pages, Esquire stops being Esquire and becomes a piece of Victoria’s Secret’s marketing strategy, indistinguishable from the catalogs and commercials these same models appear in, wearing the very same lace demi push-up bras and come-hither expressions.”

We’re all used to Access Hollywood , ET and Extra paying for, well, access Hollywood. It’s when the “news” programs like “Today,” “GMA” and CBS “Early Show” start doing it that we know journalism’s in trouble. All would vehemently deny paying for play, but how else would you describe jetting in guests to the greatest city in the world and housing them in expensive hotels?

And then there’s the TIME Inc. family. No, TIME magazine and Fortune haven’t succumbed to that slippery slope… at least not yet. But sibs People, Entertainment Weekly, In Style and a few others certainly have. How else can they compete with Hello, Us and In Touch for the celebrity heroin on which their readers are dependent?

To bolster his point, Bercovici links to his recent post about TIME Inc’s Sport Illustrated swimsuit franchise in which the magazine accepted airfare to Israel from the Israeli Tourism Board. Doesn’t SI consider itself journalism? You bet. Then how can it accept the in-kind offer?

“Adams claims SI got a sweetheart deal from the Israeli tourism bureau, which paid half the airfare to fly a crew of 17 to the Holy Land for a photo shoot with hot sabra Bar Rafaeli. It wouldn’t be the first time the Israeli government reached out to an American magazine to promote travel; Maxim featured a “Women of the Israeli.” Defense Forces” spread in its July issue.”

At first blush, the ability to barter for editorial consideration seems quite attractive to me as a PR person. At second, I find the practice to be quite abhorrent…as a PR person.