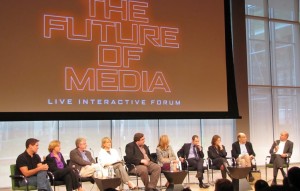 I had the good fortune to attend the thought-provoking “Future of Media” panel, hosted by MediaPost and sponsored by AOL and others, in New York City last week as part of Advertising Week.

The conversation, held at The Times Center, touched upon many of the issues with which nearly everyone in the content production and distribution space are grappling today: the monetization of online content, the role of social networks in the media mix, analytics, the blurred lines (for some) between church and state (advertising and editorial), and what’s next.

Here are some of the notable quotables that caught my attention:

Chris Anderson: “I also have to confess that I have a problem with the title of this panel….Using words like media are probably limiting us in our search for business models, and the path forward.”

Vivien Schiller “What the [NPR] stations need to do…is to become increasingly relevant to their local market. They need to increasingly provide information in the public interest to their communities, particularly as local newspapers, many of them are suffering or folding, and in doing so they become so relevant that they cannot be disrupted.” 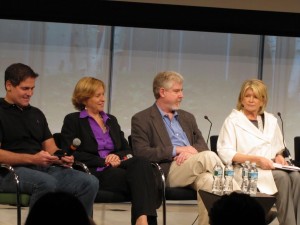 Judy McGrath “If you have some creative excellence and a brand, it’s a great fertile time to try to figure out how to connect with consumers…and hopefully how to monetize your content. It’s exciting.”

Martha Stewart “It [merchandising] is important to our customers. They want to satisfy their dreams. They want to become become doers once they learn how to be dreamers. By reading the content, they then become the doers.” 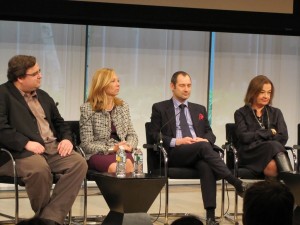 Reid Hoffman “A business model is not just something you slap on top of content production — the whole thing from how it’s discovered, distributed and produced. Those ecosystems are changing. So it’s a question of how do you re-architect the ecosystem. And that’s the thing I think would be most interesting, but also the most perilous.”

Chris Anderson “In the media industry, I’m stunned by how controversial Free [my book] is because it is, of course, the foundation of traditional media. Radio is free to air. Television is free to air. Our publications are subsidized 90 or more percent by the advertisers that are virtual free. And yet free is considered heretical by many, including by Mark Cuban.” 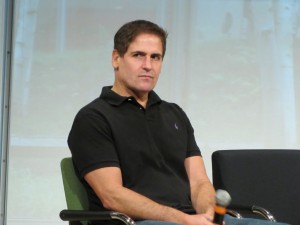 “Certainly free as a form of sampling is very valid. Giving someone a taste of it then upgrade it, has been used by drug dealers for years and years. The internet is becoming stale. Fifteen years in, it’s old news…some of the conversations we’re having here, I close my eyes, it’s 1998. Streaming media…Wow! Who thought of that idea?”

What’s next? Did anybody watch the Cowboys-Giants game where the Giants won in the last second? What was the #1 thing that was talked about the entire game? The screen! You can’t take your eyes off of it. It’s digital. It’s seven stories high, 70 yards long, and it weighs more than a 747. And it cost $40 million dollars. I look at it and I said, it cost $40 million dollars today. What’s it gonna cost in five years? What’s it gonna cost in ten years? If it’s a medium that you just can’t take you eyes off of. And it’s what everybody wants to talk about…what kind of opportunities does that create? And is that medium gonna be free? Everybody since 1976 have said ‘smaller, cheaper, faster.’ Now we’re transitioning to a world where it’s ‘bigger, better, and, cheaper.” And now, it’s going in the opposite direction. Can’t see U2?

Would you pay 20 bucks to go watch it on a seven-story high screen with the most amazing sound system with all your friends? The rules are changing. Everybody ‘s so focused on the Internet as a solution for everything, they’re missing all the good stuff….I’m talking about a platform. I think they’re going to be new platforms, that are real time, event-driven that could be connected to much bigger platforms that will ingrain a more social experience…digitally-enabled platforms that can be anywhere that will enable a better social experience. But we’re not looking for them. We’re still looking to say how can I get a better search to my iphone or my laptop or my PC to watch TV on my PC. That’s so last century.

Susan Whiting “That idea of ‘best screen possible’ enabled by content…it still matters. The entertainment and information content still matters. No matter how fragmented we get, we see that every day.”

Bob Garfield “The fundamental problem is fragmentation and ad avoidance and the glut of supply is going to…is already churning out to destroy the critical mass…produced by quality content. Craig’s List has eviscerated the newspaper industry. The DVR and the Internet are destroying broadcast. Broadcast is in huge, huge trouble…Two of the top four broadcast networks are talking about becoming cable outlets — CBS and NBC — which is swell, because cable has much better prospects than broadcast in exactly the way that it is way better to have multiple sclerosis than Lou Gehrig’s disease.” 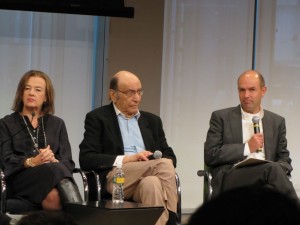 Milton Glaser “The combination of words that most terrifies me is ‘targeted consumers.’ Poor darlings. In the old days when we started New York magazine, we would not permit a salesperson to enter the editorial part of the building…I suspect that that is no longer the case…What strikes me as being most significant is not so much the emergence of new platforms, new media, new technology as much as how does it affect the nature of the message itself that people are receiving and what are the consequences. Are these targeted consumers really benefiting in the deepest way from the content?”

Martha Stewart “We’ve been watching very carefully the destruction of church and state that exists between advertisers and edit. Increasingly we find that there’ a major breakdown… There is definitely a change going on. Is that because the consumer wants to see a product next to a page talking about that product. The Internet certainly does that constantly. We are dealing with it. We are taking very close notice of it and we want to not only serve our readers and our viewers and our Internet users in the best way possible, but we also want to make money and get advertisers to welcome our good content.”

Bob Garfield “There’s a big difference between relevance and corruption…you describe the magazine world as a kind of cathedral and I think historically it’s been more like a brothel…and now it’s becoming like Plato’s Retreat.”

Vivien Schiller “I think in this conversation that we are substantially underestimating the intelligence both of the audience to smell a rat, and the intelligence of the people who run [legitimate] news organizations…Integrity is the fundamental of the business model.”

Rob Norman “One of the marvelous things that has happened…with the rise of social media in particular is the ability for the bad and the rotten and the underperforming to be teased out and actually raise the standards of corporate behavior and raise the standard of product development and relevance. …the checks and balances of the democracy of the dissemination of information. is one of the things that my clients have discovered…is that social media helps their good news travel fast and helps their bad news travel much faster than that.”

Click here to listen to the whole conversation (TRT: 85 minutes), and please excuse the audio quality.