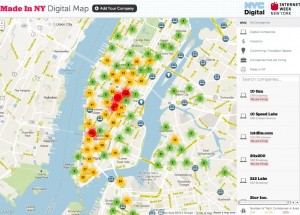 My wife insisted that Silicon Valley continues to reign supreme as the tech startup capital of the world. She’s right of course, but I’d hardly put New York City down for the count. Last year, Privco reported “100 deals for privately held tech companies in the city, with their value adding up to $8.3 billion.”

Not too shabby, I say, but then again Silicon Valley logged 226 deals valued at $21.5 billion. (The Boston-Cambridge corridor ranked third with $1.7 billion from 62 deals.) No matter. I’d still bet the server farm that New York bests all others when it comes to overall buzz and the number of concentrated events for New York’s booming startup community.

The tech meetups in Silicon Valley are likely more dispersed, but the single largest meetup group, of all meetup groups, resides right here in the Big Apple. The New York Tech Meetup now has more than 30,000 members.

Silicon Valley has Stanford and UCal Berkeley, but in addition to NYU and Columbia, New York will soon welcome the Cornell-Techneon academic research hookup slated to be built on Roosevelt Island. Its first classes just started. And Mayor Mike, who’s driving much of the city’s entrepreneurial embrace held a presser last week to unveil a map of the city’s tech hubs and startups in an effort to match job seekers with ground floor opportunities. NYC’s “Made in New York” map lists some 500 startups.

On any given evening, one has a healthy choice of NY tech events or startup showcases to attend. And this week Social Media Week takes New York with its non-stop, many tech-oriented sessions: 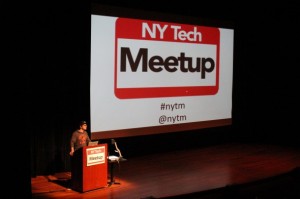 The February New York Tech Meetup sold out, as usual, within minutes of its $10 tickets going on sale (in several waves). Some 800 VCs, lawyers, coders, students, entrepreneurs, and would-be entrepreneurs filled NYU’s Skirball Auditorium with scores more gathered to watch the webstream from  New Work City. (The event could still use some more marketing/PR pros, IMHO.)

The format is pretty straightforward: ten startups take the stage and have either 3 minutes or 5 minutes to demo their technology (and raison d’etre). The audience then gets to pose questions about the technology only.  It’s verboten to ask about the startup’s business model or its potential revenue streams. “It’s all about the tech,” as co-moderators Jessica Lawrence and Nate Westheimer remind the audience.

Some of the #NYTM presenters that struck a resonant chord with me included:

When I saw the tweet from a TechCrunch reporter I follow touting the upcoming NYC Meetup and Pitch-off, I immediately signed up. Last year’s event was fun and offered a chance to chat up some of the TC reporters on hand. This year was different. In spite of this disclaimer: “Claim your free ticket now! Space is very limited,” the event, I was told, drew some 800 attendees to a subterranean crowded geek frat party. The free pizza and two drinks helped soothe the congestion at the Santos House Party, but the strain to watch the demos proved too much. I made an early exit.

* * *
A few days later, I had the good fortune to attend my first 500 Startups demo event, hosted by the exuberantly upbeat Dave McClure from whom I grabbed some video below. 500 Startups’ New York Demo day, held at NYIT off of Columbus Circle, featured about 30 early-stage and, I must say, well-vetted startups who had three minutes piece on stage to sell the premise of their creations. After a brief intro by Mr. McClure, the founders sauntered on stage to the heart-pumping music of their own choosing (or so it seemed).


In contrast to the New York Tech meetup, these entrepreneurs put their business models and prospects for success front and center. It had the effect on this attendee at least of wanting to pull out my check book (or fire up my Square app) right then and there.  Some of the startups with which I was especially smitten included:

The 500 Startups event ended with a tÃªte-Ã -tÃªte between successful entrepreneur and now startup investor Gary Vaynerchuck and Mr. McClure. Profanity aside, Mr. Vaynerchuk hasn’t lost a step. His no holds barred advice resounded strongly with the attendees – established VCs, among them./div>