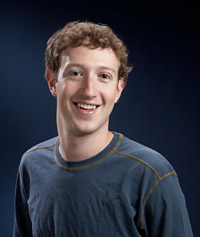 No. I’m not attending the conference referenced in this post’s title. But a team from MB’s FishBowl NY is, and their reports seem to justify the expense of sending them.

First, they salaciously recount the awkward on-stage interview between Sarah Lacy, a former Business Week reporter, and the dedicated, self-effacing (and too youthful–>) Mark Zuckerberg who hopefully needs no introduction to the readers of this blog.

Apparently, Ms. Lacy’s line of questioning and overall style were so off-putting, she elicited boos from the audience, an audiene admittedly featured fawning fans of FB. Here’s one recount:

“2:21: Upon her own interruption, Lacy accuses Z. of having ‘hurt look on [his] face like, ‘Waah, I was talking.” New Yorkers seated behind us: ‘This is mad awkward.’ She’s talking to an intelligent billionaire like he’s a five-year-old. Wake up Lacy, we’re in Web 2.0 and Z’s since cleared kindergarten.”

Having done a fair share of new media moderating, I’m just thankful that the Fishbowl NY scribes missed my star turns! The interview ended with this final goodbye between Ms. Lacy and Mr. Zuckerberg:

And this comment came later in the day from Mr. Z:

“I feel really bad for Sarah…Right about the time when Sarah thought it was over is when it should have ended.”

Elsewhere in mediabistro land, we play second-hand witness to the SXSWi’s on-stage (and off-stage) interplay between Forbes’s Quentin Hardy and Google’s IT guy Doug Merrill. One question from the audience prompted the Scobeleizer himself to spring from his audience seat to vocalize his unequivocating vocal chords. Here’s what prompted Mr. Scoble:

This “self-proclaimed ‘old-media’ journalist asserted to the group…that blogs didn’ [sic] contain “real information,” and that she didn’t understand why their proliferation of coverage was getting preferenced [sic] over old print saws.”

To which the inimitable Mr. Scoble had this to say:

“I’ve gone on CNBC, I’ve written for magazines,” he charged. “They didn’t improve my Google ratings at all. None of these things has helped the way blogging has. If you want better ratings, you don’t go to the mainstream media.”

“Ratings” or a pop in a high profile MSM outlet with all that it engenders? Hmm.

Then there’s this fresh link from AlwaysOn to a Newsweek piece that extols the virtues of the MSM. (Can we blame them?) Could we see a resuscitation of the debate between citizen and mainstream journalism? More SXSWi ’08 posts here.