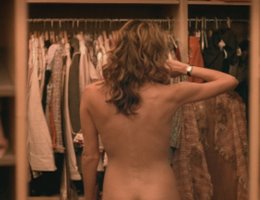 Coming back to the fashion crowd, albeit the antithesis of New York’s Fashion Week, I’m sure you’re all familiar with Bluefly.com. Apparently, the online clothing discounter, in an effort to bolster brand awareness, created a new allegedly risque digital video ad — a year after the first — and charged its PR firm to: “go out and make it viral…” again.

One ink-stained journalist, from the bastion of all things retro, posted the PR pitch on his newspaper’s weblog. The sell?

“Bluefly is launching a provocative ad campaign entitled “We’re Gonna Be Late” following their controversial Spring ads, which also featured tasteful nudity. Based on network responses, they cut most of the provocative scenes for television, even though the content on their programming is just as sexy, if not more so.”

This come-on piques the recipient’s purient interests to peak at the new, err…old creative, and even take a look at the un-cut version. (But then of course an unfiltered search nowadays on YouTube would yield a much more scintillating selections.)

Net net: sex sells. I just wonder whether this approach is getting a little tired. Even my old HotJobs.com client changed its Super Bowl creative year after year after year.