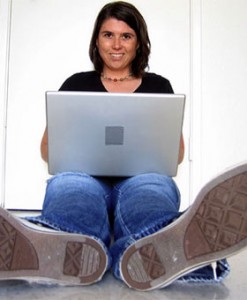 As the long-time, but recently retired editor of the Gawker-owned A-list blog Lifehacker, Gina Trapani has moved effortlessly in tech and social media’s rarefied circles. In her editorial gatekeeper role, she also received more than a fair share of inane or misguided story pitches from lazy or vendor-reliant PR people.

Now that she’s out of her LifeHacker role, but still with a personal platform to exude influence, Ms. Trapani (pictured) decided to get back at those purveyors of PR spam by publishing a wiki listing the domain names of the PR firms that she believes have done her wrong over the years.

Unlike her fellow scribe Chris Anderson of Wired and Long Tail and Free fame, who set the industry on fire by publishing his own list of PR miscreants, Ms. Trapani seeks to punish the employers of those wayward pitchers by publishing the firms’ domains.

What’s surprising to me is that some of the firms listed are considered some of the more forward-thinking and new media-sensitive ones in existence. (I’ll refrain from naming them in this space.) And I’ll leave the reporting on their transgressions up to the Bad Pitch boys.

Now I suppose the firms bear ultimate responsibility for those who de-elevate their and their clients’ reputations in the eyes of journalists, but our industry – not unlike others, including the media business — has its bad eggs. Should the whole firm be punished for the errors of a few? I think not. After all, the wiki could very easily end up listing every PR agency out there.

The bigger issue, as I stated in a recent post, often lies with the outside PR services that automate the process of media engagement — to a fault. When a PR person can blast e-mail a pitch to scores of journalists at a time, based solely on title, invariably the recipients will get tee’d off by the nonsense that annoyingly fills their email boxes.

This perennial problem is the primary reason why I pushed to co-develop an application whereby journalists would be identified by their past coverage, not their titles, and users would only be able to send one pitch-at-a-time. Also, instead of a wiki, MatchPoint now gives the recipient a mechanism to rate the relevance and quality of the pitch. Consistently low-rated PR people will be banned from the system.