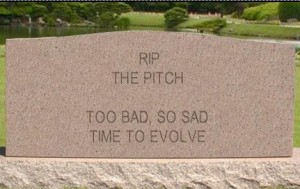 I found it ironic that the author of Groundswell, a book/movement/phenomenon that describes how ideas germinate from the ground up — without top-down influence — devoted space in his blog to the PR practice of pitching stories to influencers (e.g., “anyone with an audience”) from the top down. The book posits:

“When consumers you’ve never met are rating your company s products in public forums with which you have no experience or influence, your company is vulnerable.”

Could it be true that the art of engaging (and influencing) reporters to favorably portray one’s clients’ products, services or POVs remains valid in this socially driven day and age?

Of course it’s true, but that wasn’t the point of Josh Bernoff’s post. Instead, he proposed a radical “new” idea to eliminate the “99% waste” in his and other influencers’ e-mailboxes. He gave it the obligatory acronym: HIRPS for “Highly Relevant Pitching System,” and proceeded to describe a closed system whereby journalists would list in detail what interested them editorially. PR peeps would then pay to gain access to this information and the right to contact the influencer within the system. What’s more, pitches would be limited to 1200 characters and recipients would rate the quality of the overture.

Mr. Bernoff even went so far as to share his idea with the folks at Cision, which, along with Vocus, dominate the media database management and distribution (and some would say PR spam) business. He reports that the idea was received favorably.

Kvetching about PR spam is nothing new. (Thank you, Chris Anderson.) I’ve written about it from this blog’s nascent days and even went so far to co-develop with the team at eNR Services a proprietary system that also strived to eliminate PR spam.  In so doing, we hoped to revive the dying art of engaging journalists with viable story ideas, and hopefully restore the value PR pros bring to the media relations equation.

As for HIRPS, I’m not convinced that journalists will take the time, let alone see the ROI, in registering for the service. Sadly, a bi-product of their years of receiving misguided (if not inane) PR queries, plus the online proliferation of alternative story sources and story-parsing software, have lessened their perennial reliance on the outside PR professional for timely and credible information.

The platform we developed, named Matchpoint, doesn’t rely on the benevolence of journalists to share their editorial proclivities.  It instead aggregates the journalists’ bodies of work and matches the PR person’s story query against it. The search results produce a list of journalists (and their contact info) whose editorial orientation is quite clear. What’s more, the system allows the user to directly engage the journalist with a customizable pitch — one reporter (or blogger) at a time — and lets the journalist rate the sender/pitch.

Surprised to learn that Mr. Bernoff was not aware of this service, but glad to see his implied endorsement of the age-old and still valid practice of media relations (or rather, “influencer engagement”).