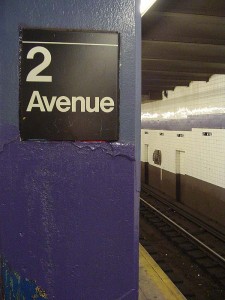 To promote the opening of The Who’s “Tommy,” my first boss convinced entertainment impresario Robert Stigwood to hold the film’s premiere party in New York’s 57th Street subway station. The connection between the NYC subway and the movie (or its vinyl origin) always escaped me — except tied to the lyric: “Tommy, can you hear me?”

Nevertheless, the choice of this underground venue drove the kind of boffo media coverage, e.g. ROI, that more than justified the lavish and logistical expense. (Also, it probably gave many of the glitterati in attendance their first look at a New York subway station.)

Flash forward to a more recent “underground” news conference in which the choice of venue reaped prominent headlines, but soon also produced a backlash. The New York Times headline sums it up:

Holding a groundbreaking ceremony for a new subway line in the subway tunnel certainly made more sense thematically than a black-tie movie premiere:

“‘The groundbreaking ceremony for the Second Avenue subway was a historic event that wonâ€™t be forgotten by those in attendance and the thousands of New Yorkers who watched on live television,’ Jeremy Soffin, a spokesman for the authority, said yesterday in a statement. “Costs were incurred to hold a safe event in such a unique setting, but we believe it is important to expose the public to our infrastructure to better understand the transit system that drives the regional economy.'”

Still, isn’t this the second gaffe by a New York transportation authority in which the initial headlines soon catalyzed a negative public reaction? Lesson learned: government agencies, non-profit organizations, academic institutions, and others in whom the public trusts, need to be very wary of appearing to betray that trust.

BTW — the MTA should be thankful that the story omitted the PR agency fee when calculating the $89,000 figure spent on the subway event. Five figures definitely looks much better than six.

Anyway, take the weekend off. Enjoy your time with friends and family. New York’s expecting some sultry July temps this weekend.