Guess what? The Internet is full of b******t and its volume is rapidly replicating – mostly unchecked. Much of the spurious info we find on the Web originates from amateur “we the media” types. However, more and more mis/disinformation is purposefully propagated by partisan entities, some with nefarious agendas. A Google search on “Martin Luther King” produces a top five result, “Martin Luther King Jr. – A True Historical Examination.” It was created by a white supremacist organization.

What’s worse, the identities of those bankrolling the dissemination of such digital propaganda often are hidden…legally.

As the November elections draw nearer, the online explosion and public consumption of factually challenged news and information threatens the very foundation of our democracy. (Thank you, Justice Roberts.)

With the (Herculean) goal of exploring remedies for an increasingly untrustworthy digital media environment, I ventured to Harvard Law School yesterday to participate in the first Truthiness in Digital Media conference.

Joining me were a who’s who of media pundits, legal scholars, hackers, media watchdog and public advocacy groups, nearly all of whom were painfully aware of the dangers digital delusion holds in a democracy.

This conference will focus on exploring the many facets of this complex issue with an eye to crafting tools and strategies to ameliorate the negative impacts of deception, bias, and inaccuracy in the digital media ecosystem. We hope to come to a better position to take advantage of the benefits promised by digital media while appreciating the positive aspects of creative media-making and probing the blurred boundaries between nefarious and beneficial media shaping practices.

As someone who’s made a career out of trying to wrap his arms around what makes a story meme catch fire in traditional news media, and more recently in the blogosphere and social channels, I had more than a passing interest in the conference’s theme and purpose.

I also may have been the only PR professional there other than the PR Director for the Ford Foundation and Wendell Potter who outed an unfortunate side of the industry with his PR-antagonistic book about his work spinning for a giant health insurer. Most everyone else in that room were intensely smart and committed activists. Needless to say, many held the PR industry in relatively low esteem.

Fortunately, I still subscribe to PRSA’s code of ethics (and Harold Burson). I firmly believe that quality journalism is even more essential today in an increasingly polluted news ecosystem. (Maybe it was my past work for The New York Times and The AP that cemented my stalwart POV on this.) Conference attendee Micah Sifrey said it like this:

“If the media is the immune system of democracy, as Craig Newmark likes to say, then the act of asking questions of the powerful might be thought of as the mitochondria, the energy source that powers the immune system.”

Attendees heard from a range of esteemed presenters and were encouraged to hit the red button to liven their microphones to chime in. Some of the presentations that resonated for me included:

Wendell Potter, Cigna’s former PR chief-turned-whistleblower who wrote Deadly Spin. He noted that the diminished news ranks have given corporations an upper hand in propagating their messages. He also acknowledged the increasingly important role fact-checking orgs play in the new digital/social media ecosystem.

Berkman Center’s Yochai Benkler analyzed the underpinnings of the SOPA/PIPA defeat, and gave considerable credit to TechDirt and other influential tech media sites, though it was clear that they didn’t act alone. Other “action-oriented sites” made important contributions to the demise of the proposed bills. 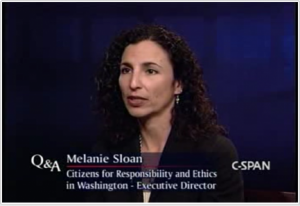 Next up was Filippo Menczer from Indiana University, which developed Truthy as means to understand how memes spread online. If you like this, watch Jake Porway’s presentation on Cascade from The New York Times’s R&D department.

Filippo was followed Tim Hwang whose presentation on the use of bots to influence the online conversation frightened the heck out of me.

Kathleen Hall Jamieson of University pf Pennsylvania’s Annenberg School kicked off the next session titled “Elusive Objectivity: Finding the Truth is Hard,” by showcasing FlackCheck.org, a sibling of FactCheck.org but focused on misleading political advertising.
I asked her why the term “flack,” a pejorative term associated with PR (and the name of this blog). She explained its association with FactCheck and that its connotation would be readily understood. More importantly, she told me that TV stations airing misleading if not downright false advertising have no legal or regulatory obligation to not air them. Her hope is that public awareness and pressure will prevail in getting these ads pulled.

From one Ivy to another, Emily Bell of the Tow Center at Columbia Journalism School, formerly with The Guardian where she played a pivotal role in bringing the UK’s most esteemed newspaper into the digital age, opened by showing the Guardian’s Three Little Pigs video on the state of journalism today:

She then made a couple of observation that resonated with me:

“Allowing people to interact with news content will ‘sustain journalism'”

In the next session “Biases Abound: You Canâ€™t Handle (or Donâ€™t Want) the Truth,” author Chris Mooney introduced the audience to the term the “Smart Idiot Effect” or “”There is a science of why we deny science.” He shared research that demonstrated how the views of educated political conservatives will not change when faced with cold hard facts that directly contradict their intractable point-of-views.

Furthermore, facts alone for this particular demographic makes them even more emboldened in their thinking. (Not that birthers are educated, but I understood his point.) 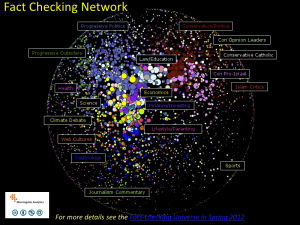 He penned a post today on his experience at the Truthiness event in which he questioned whether there is an easy way to fact-check the vast amount of misinformation out their in the digispheres. He alluded to the above graphic of where these fact-checking orgs reside in relation to one another. He also penned a second post that sums up some of what was discussed yesterday.

Here are a few more tweets emanating from my Macbook Pro yesterday:

Today, the conference moves over to MIT for a hack day, according to MIT Media Lab’s Ethan Zuckerman, designed to take a “more experimental approach” to the problem versus Harvard’s “more systematic approach.” “We’ll focus on ‘tractable’ vs. ‘intractable’ questions, i.e., little experiments that can measurably thwart disinformation.”

As for me, I’d love to be there, but I’m tied up disseminating fact-based information to the many influencers in the digital spheres on behalf of my clients. Thanks Colin Maclay and the Berkman team for putting on a most elucidating day.