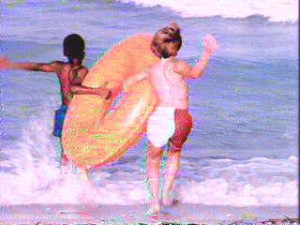 So let me understand this. After using its news credentials to gain entry to the White House Correspondents dinner, C-SPAN is making waves for YouTube for posting its Colbert footage…after giving YouTube rival Google Video the one-time rights to post the entire affair. Furthermore, the non-profit network is offering for sale a DVD of the event at $24.95 a pop.

Sure, we learned to live with the blatant product placements in prime time sports and entertainment programming. Just check out any episode of ABC’s “Extreme Home Makeover” or any NFL broadcast. We’re also seeing more and more commercial plugs in quasi-news programs, including the network morning shows and the early fringe entertainment shows.

But the idea of leveraging one’s press credentials for eventual syndication and sale rubbed me the wrong way. Will the decision to cover a news story be guided by the resulting video’s viral marketing potential? A slippery slope, I say.