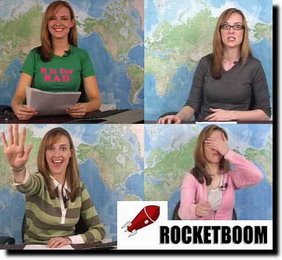 To hear Rocketboom co-founder Andrew Baron explain his decision to sell his Twitter account (and his 1400+ followers) to the highest eBay bidder, one would think the answer is a combination of A and B.

“Every time I would go to Twitter, I would think really hard and try to come up with something important to say. I’d also try to talk about things I was doing, like going out to have a drink, or I would try to be poetic,” says Baron. “It wasn’t working for me.”

But judging from the (good and bad) attention he’s receiving for the ploy, I wonder whether this is simply an attempt to regain some media relevancy. After all, what numbnut would even want to follow Mr. Baron’s tweets without Mr. Baron?

Heather Green’s piece in Business Week, “Twitter for Sale,” twittered by her Blogspotting cohort Steve Baker, points to the ethical dilemma inherent in selling access to one’s “followers.” Mr. Baron admits that in his deliberations to unload his account, he learned that someone had tried to do the same with a Digg account, but was rebuffed by Digg’s terms-of-service. Twitter doesn’t appear to have the same TOS issues.

And since we’re talking about Twitter ambivalence, another Twitter development appears to be percolating: is the two-year-old tool readying a plan to accept advertising? Here’s the overnight interplay between two of Twitter’s most prolific users: Scoble and Arrington.

Scobleizer I want to advertise on only one guy’s account. I want to spam the heck out of @jasoncalacanis. 🙂

TechCrunch @Scobleizer thanks for the link on twitter advertising http://snurl.com/24gke

TechCrunch It seems to me twitter is turning into a major Internet utility. no reason to screw that up with ad insertions, yet.

TechCrunch @Scobleizer a model i would endorse is where twitter charges say $10/month and lets us put our own ads.

Thus far, the bidding for Mr. Baron’s account is up to $1550 (or a little more than $1 per follower). Hmm. That means I can make about $90 if I put my feed up on eBay. Nah. It’s too much fun getting an early beat on tomorrow’s tech scuttlebutt.