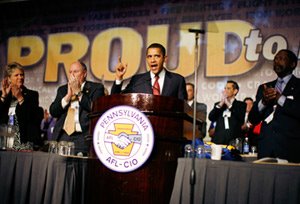 If you missed Kit Seelye’s take today on how one off-the-bus Obama citizen supporter/reporter could very well derail her candidate’s political prospects, it’s a most worthwhile read. For some command-and-control PR types, it should also strike a nerve.

In a nutshell, the Obama campaign invited one Mayhill Fowler, a 61-year-old reporter for Off the Bus, the Jay Rosen/Arianna Huffington’s consumer-driven campaign press corps, to attend an Obama fundraiser in California supposedly as a contributor. It was at this closed-to-the-media event where the mostly inspiring candidate dissed all gun-loving, religious types living in pivotal Pennsylvania.

Ms. Fowler, wearing her journalist hat and armed with her digital recorder, struggled with whether to report the ill-timed and ill-conceived remarks by her candidate-of-choice. Four days later she did, and all hell broke loose.

Since this is a PR blog, I found it especially intriguing, in an age of the Internet-driven political campaign, how the Senator’s handlers thought they could keep the media lid on what was ostensibly a public event. Ms. Fowler gained a “credential,” (i.e., access) as a supporter, not as a reporter, but she believed otherwise:

â€œWe had a fundamental misunderstanding of my priorities,â€ Ms. Fowler told me. â€œMine were as a reporter, not as a supporter. They thought I would put the role of supporter first.â€

â€œIt was indeed a fund-raiser to which the press was not invited,â€ he wrote. â€œOr if you wish, it was closed to press. Therefore it wasnâ€™t on or off the record. Off the record is when journalists consensually agree to witness or hear something on the condition they not report it.â€

To compound the confusion,

“Ms. Fowler said she held her digital recorder openly. The place was jammed with others using video cams and cell phone cameras. Among them, Ms. Fowler said, was a professor who was recording the event for his students. In fact, snippets of the speech have been posted on YouTube by others who were there.”

It reminded me of when a former client instructed us to ask the audience of concert “extras” to bring cameras to a taping of a TV commercial featuring Elton John, but forbid them from taking actual pictures. Groan. Today, most of the smart PR set acknowledges that everyone and anyone can be a journalist, nothing is off-the-record, and that total command over a client’s public portrayal is a thing of the past.

BTW – I did get a kick seeing Obama-supporter Ms. Huffington’s quoted in the newspaper this morning:

“We are a news site,” said Ms. Huffington, who cleared the post by cellphone aboard David Geffen’s yacht in Tahiti. “We have opinions, points of view, but we’ll post whatever is newsworthy.”

So much for Obama shaking off allegations of elitism. Mr. Geffen (or Ms. Huffington) apparently took issue with his/her contextual presence in Ms. Seelye’s story. The online version of the piece now reports “sheâ€™s on a cruise in the Pacific.”

Here’s the round-up of reactions to what has been dubbed “Bittergate.”