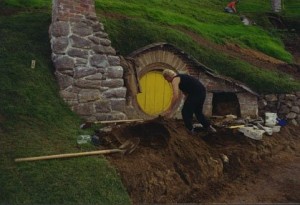 New Line Cinema, no stranger to viral campaigns, has caught a malicious virus itself, which it now hopes to quickly cure.

You see, one famous director of the company’s most famous film franchise, decided to have his dispute with the studio tried in the court of public opinion.

To understand the power of the blogosphere for driving public sentiment, we need not look past a single post “Lord of The Rings” director Peter Jackson made on theonering.net after he was removed as director of New Line’s “The Hobbit.”

“Within hours thousands of other fans weighed in on lordotrings.com, onering.com and other sites, worrying about the future of the Tolkien enterprise and asking New Line, which has an option to produce the film until 2009, to back down. Theonering.net was among those calling for a boycott of any Hobbit film not made by Mr. Jackson.”

Gee, why don’t my posts spur that kind of viral behavior? I guess this version of virality is reserved for the likes of Cuban and Clooney, Arianna and Arrington.

Z-list virality — no matter how del.icio.usly optimized, Dugged, tagged, or RSS enabled — struggles harder to percolate publicly, if it does at all. Are there exceptions? Yes, many. But the power of persuasion from a branded persona can be potent indeed.

PR Peter Jackson Lord of the Rings The Hobbit viral