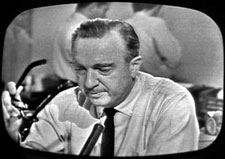 I confess. My Twitter habit is not 24/7. I have a family, clients, sleep requirements, an appetite, and frankly, a social (versus social media) life that also sustain me. Anyway, my PowerTwitter platform isn’t as functional as Tweetdeck, so many tantalizing tweets have been known to pass me by.

On Friday evening, I did find myself in the Twitter flow when The New York Times’s indefatigable TV scribe Brian Stelter tweeted Walter Cronkite’s passing. It included a link to The Times‘s “Decoder” blog. My immediate instinct was to RT the (not unexpected) flash based solely on Stelter’s 140-character characterization.

I queued it up, but then pulled back. Maybe I should check out the Decoder post first just to play it safe? I did, and there was the validation under the imprimatur of The New York Times. I hit my Twitter update button, edging in my tweet just ahead of Breaking News Online (BNO), and only two minutes after Stelter’s first tweet.

The next morning, I learned from @nytimes and @nyt_jenpreston, NYT’s “social media editor,” via @jennny8lee, how The Times appears to have scooped the entire media ecosystem.

In early 2003, the family of former CBS Inc. CEO Thomas Wyman asked my firm to help handle the news of his death. The PR duties fell to me. Working with his son, I finally had an announcement in hand. My first call: the city desk of The New York Times followed shortly by the AP city desk. At The Times, Douglas Martin, who penned Mr. Cronkite’s obit, took the lead on Mr. Wyman’s. The media universe ran with the news from there.

As I consider Mr. Cronkite’s passing, I’m stuck on the question of media validation. Which outlets have the journalistic chops to make it safe for everyone else to publish, post or broadcast a big breaking news story? Should one trust TechCrunch, TMZ or BNO as they would a New York Times, AP or CBS News? It’s already clear that many bloggers and most microbloggers don’t distinguish. Shouldn’t they?

And what are the long-term consequences for getting that first story slightly or completely wrong? Will the “rumors of my death are greatly exaggerated” become a familiar refrain? Will the self-styled journalist crowd eventually correct the first/worst write of history? Where will the guidance come from – influential blogs, the Twitterverse, or those news organizations that adhere to long-standing journalistic standards to get it right the first time.

In a former media age, it was The AP to which mainstream news organizations turned before a breaking story was deemed ready for prime time. And since The AP is a co-op of newspapers, many major dailies had commensurate news-validating power. (The AP also picked up and moved their stories.)

The recent news of another larger-than-life persona — the circus-like death of the Gloved One — reminded me how CNN took some heat for its journalistic restraint on confirming Mr. Jackson’s death, even as the Twittersphere and a number of mainstream blogs and websites gleefully ran with TMZ’s reports. It was an hour after Mr. Jackson’s death before CNN reported it, and I think it only happened after a hedging L.A. Times made it safe to do so.

“News organizations do not need to fall in line behind sources such as TMZ when a report like Jackson’s death breaks. The Twitterverse’s been wrong about alleged celebrity deaths before. But in this situation, smart news organizations should acknowledge to their followers and readers that they know the report is out there and that people are talking about it, and report where the organization is with its own reporting.”

Ironically, Bill Carter, in a short, NYTimes.com video vignette on the life of Walter Cronkite, included Mr. Cronkite’s hesitation — by 38 minutes — to report the news of JFK’s death. His green light? An AP News Flash. Those days are over. As Jeff Jarvis tweeted Friday evening:

@jeffjarvis: No disrespect to Cronkite, but I am glad to be past the age of the oracle anchor.

On the other hand, to whom will our nation turn its lonely eyes? Harvey Levin?