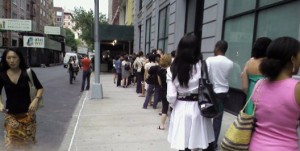 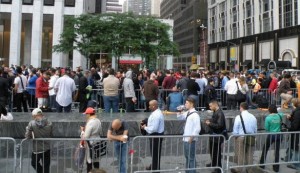 David Carr’s flashback today to Talk magazine’s over-the-top launch party a decade ago reminded me of just how far the media literati and fashion glitterati have come since then.

Reflecting back, Daily Beast’s Tina Brown wryly noted, “It seems like that happened in the 18th century.”

Even the fashionistas have gotten hip to the new media/marketing modality. Case in point: The Barney’s Warehouse Sale.

There was a time when that famous New York designer clothing sale captivated the collective imaginations of any New Yorker aspiring to achieve sartorial splendor. Much of the once-yearly event’s allure grew through the tightly lidded mystery of when it would take place, let alone its boffo 50-75% discounts off the most-desired fashion labels.

Typically, one learned of the Warehouse Sale through a single advertisement in The New York Times…on the very first day of the sale.

Like today’s iPhone (pictured at left), PS3 or Halo debuts, people queued up at the warehouse’s discreet entrance (photo) midway down 17th Street (pictured) between Seventh and Eighth Aves at the crack of dawn. By the time the doors opened at 8am, the line snaked down 17th Street, around and up Seventh Avenue. (That New York Times ad sure had an uncanny way of motivating the well-heeled crowd.)

Several years ago, I found myself stuck in L.A. during the New York sale. I was spectating my #2 son’s sailing regatta from the Santa Monica pier alongside a grizzled fisherman and his portable radio. Suddenly, I heard it: “Barney’s famous warehouse sale starts today” — two miles away in a hanger at the Santa Monica Airport! I stashed my binoculars and high-tailed it down to the airport.

Racked.com just reported on the upgraded L.A. sale and the addition of San Francisco to the mix. And to keep with the times, the clothier’s marketing team popped out a YouTube video to promote the three sales (albeit with just 485 views thus far). You have to give them credit for adding some blogs and YouTube to the media mix. And, yes, I bet The New York Times will still be deployed to drive foot traffic.