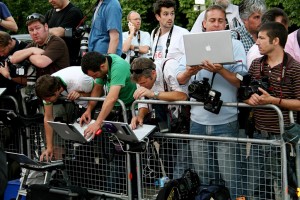 We all know how much money an exclusive image of an A-lister out-of-context, or preferably out-of-control, can command from consumer-facing media.

But the market value of the companies that intermediate between the shooters and the media came further into focus yesterday with news of the sale of Wire Image to GettyImages for…$200 million.

The news release summed it up in its lead graph:

“It’s no secret. Now, more than ever, the world is fascinated with images of celebrities, entertainers and athletes. So much so, in fact, that it’s become one of the fastest growing categories in the visual content business. Today, Getty Images, Inc. (NYSE: GYI), the world’s leading creator and distributor of visual content, is announcing an acquisition that will support the company’s stated strategy of accelerating the growth of its editorial imagery business.”

“Back then, we turned away any photographer who did not have a legitimate assignment from a recognized mainstream photo desk. Then along came (citizen photographers) from big and small photo syndicates like Gamma, Sygma, Sipa, Retna, LGI, etc., and we had to open the door wider given the pick-up their images soon enjoyed. (Today that world is dominated by Corbis, Getty Images, and Wire Image.)”

Most American paparazzi were just starting to build a syndicated presence beyond Newsweek’s “Newsmakers,” TIME’s “People,” People’s “Star Tracks,” and WWD’s “Eye” sections. It may have been former NY Post photographer Dave McGough who first left the pack to dabble full-time in the riches of celeb photo syndication. It was so agreeable that he hung up his lens, hired a stable of others do the clicking, and bought a farm in upstate to syndicate full time. (WireImage closed his DMI brand last year.)

Then Corbis and Getty rolled in, buying up all the smaller photo syndicates. The public’s rapacious appetite for celeb images (preferably indelicato) drove up the syndicates’ value, not to mention their shooters’ command of the front-and-center spots on the velvet rope. Move over, Ron Galella.

Today, the glossies are starting to be threatened by online upstarts who have the ability to instantly satisfy the insatiable cravings of today’s voyeuristic public.