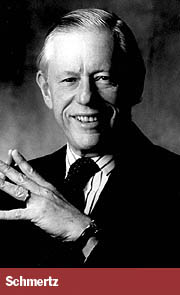 This blog periodically looks at the immeasurable contributions an impartial media make in a democratic society, i.e., trained journalists who ferret out and expose untruths and…spin. Maybe it was my PR work over the years for two news organizations, The Associated Press and The New York Times, that fortified my position.

I’ll never forget standing alongside former AP president Lou Boccardi when he told a Washington Post photographer arriving late to a DC presser to, in effect, stick it when the photographer asked Mr. Boccardi to return to the podium for a staged photo. 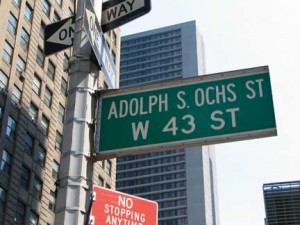 Then there was my heated argument with an advance man for then-NYC Mayor Giuliani who insisted we re-position the new street sign at Broadway & 43rd Street so the shooters covering the sign unveiling would have a better angle. The person for whom the sign was being dedicated, Adolph S. Ochs, would have turned over in his grave.

For a variety of reasons, the number of truly impartial news organizations is in rapid decline – both financially and from their heights of mass esteem and influence.

A week ago I posted a link to the trailer of Andrew Rossi’s new documentary “Page One: A Year Inside The New York Times” chronicling a year behind-the-scene of one such journalistic enterprise. The Daily Beast attended the Sundance screening of the film and had this to say:

“Rossiâ€™s film raises questions about the simultaneous crippling and dynamic state of journalism todayâ€”is WikiLeaks founder Julian Assange a reporter? Is Twitter a valid news source?â€”but it is ultimately a love letter to the Times, and to the kind of old-school journalism where facts are diligently checked, sources are given a chance to respond, and a level-headed sense of reason prevails over flashy, traffic-driving headlines.”

It may be odd for a PR person to share his longing for old school journalism in an age when so many opportunities abound for my colleagues to bypass the filter and speak directly to consumers.

Who in our business of a certain age can forget those paid advertorials at the bottom of The New York Times’s vaunted editorial page? Mobil’s long-time head of public affairs Herb Schmertz built his legacy on the back of what was considered at the time a most novel approach for sharing a corporation’s POV.

Today, the idea of a corporate-created original “owned” content for direct-to-constituent consumption is quite de rigeur, if not old hat. What’s unusual in my mind is that new media empires are rising based on this model. And I’m not talking Fox News or MSNBC. 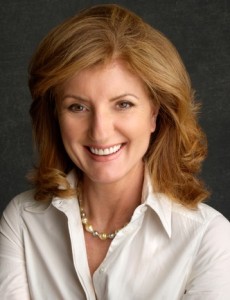 A quick read of the world’s most popular weblog will give you a good sense of where journalism is headed. The Huffington Post makes no excuses for the fact that the majority of its content does not come from professional journalists. It’s aggregated from other noteworthy sources, but more significantly includes original posts from newsmakers whose voices traditionally were only heard through a journalistic filter.

In fact, one might even conclude that the content carried on Huffington Post may be the most pure form of expression that exists today. One gleans the subject-expert’s POV in his or her own unexpurgated words.

In the old model, journalists were the subject experts by virtue of the beat system. I mean who knows more about trends in consumer electronics than Mossberg or Pogue? The head of SONY Consumer Electronics, that’s who!

The HuffPost model has attracted a who’s who of esteemed contributors who, btw, are not paid for their musings. More importantly, they do not pay to have their perspectives published. So how is it that HuffPost will “grow its revenue six-fold over the next three years?”  The lede in a recent ClickZ piece featuring HuffPost’s chief revenue officer Greg Coleman read:

“IBM’s healthcare director had an article published on The Huffington Post last year about primary care, and conducted a back-and-forth discussion with readers in the story’s comments section. It’s an example of a growing component of the media firm’s ad revenue pie, and what Huffington Post president and chief revenue officer Greg Coleman calls the site’s “calling card” to advertisers and agencies.”

Now here is where I began to ponder the possibilities. Sure. IBM is a most authoritative source on a range of subjects. And the piece in question no doubt addressed a core IBM area of expertise. Nevertheless, IBM paid for the play, as do other forward-thinking content-driven companies (if Greg has his druthers). 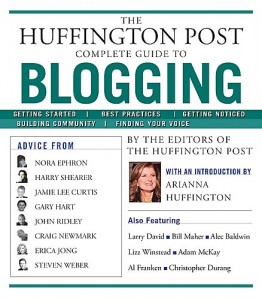 Many purists will scoff at what appears to be an overt crossing of the line that separates advertising and editorial, but I’m not so sure. Here’s how Mr. Coleman described it to ClickZ:

“The ability to really get our advertisers to engage in the conversation in real-time, whether it’s blogging directly on The Huffington Post or engaging in the comments…where they’re naturally going to be retweeted with the company’s hashtag…the level of interest we have in this marketing form is gigantic,” said Coleman.

Intrigued by this “marketing form” and its implications for the sustenance of tomorrow’s “journalistic” enterprises, I decided to send a note to one of HuffPost’s senior executives whom I’ve met socially. In it I said:

“I was a little surprised to hear Greg talk so matter-of-factly about sponsored content, which, to some purists, might be considered an oxymoron.”

“As you know, ‘sponsored’ content allows companies and brands to express themselves in the real-time debate about important issues. If they follow our guidelines, this kind of content will make a valuable contribution to the discussion.”

I looked for “the guidelines” on the site, but couldn’t find them. Nevertheless, the revelation of Herb Schmertz’s New York Times advertorials and the conversation/debate they spurred should not be overlooked as media seeks to reinvent itself. Add a social element to the content, and those company-created conversations are carried further and wider.

Can our democracy survive without traditional reporters plying their trade to uncover injustice and wrongdoing? No. But the unfettered voices we discover on Huffington Post and elsewhere have a place in the media mix — whether they’re paid or not — just so long as each is properly delineated as such.