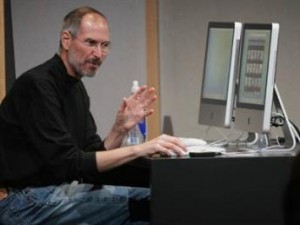 Here we are again: back to Apple. Tell me: don’t all digital roads eventually lead back to Apple? Well, from a PR perspective, actually not. The proprietor of this blog has allocated a decent share of space to the PR peccadilloes of Cupertino’s (and the world’s) most famous company.

Many of my previous Apple-related posts have pointed to the paradox of how such a traditional, command-and-control PR culture has produced such unprecedented success in today’s new socially driven world order.

The company is not active on Twitter, though it has unofficial proxies. It doesn’t blog corporately nor does it allow its employees to do so. Others do so on its behalf, much to its chagrin. And its corporate Facebook page is a Wikipedia entry run by who knows who.

In a piece this week “Fortress Apple,” Newsweek‘s Dan Lyons implored the company to “open up.” He writes:

“Part of me is glad Apple is doing this, because someone needs to buck the “everything is free” trend and see what happens. But I think the company is taking things to an extreme, exerting a degree of control that may ultimately undermine its own success.”

He’s referring of course to Apple’s long-standing proprietary technology, and how for years, the closed Mac OS allowed the Wintel duopoly to eat its lunch grabbing 90% global market share for PCs. Mr. Lyons updated this argument with Apple’s decision to drop Flash in the iPad:

“If you own an iPad or an iPhone, you’re aware (and no doubt frustrated) that it won’t run videos created in Adobe’s Flash software, which accounts for half or more of all the videos on the Web. An Apple spokesman says Flash is “closed and proprietary” and that Apple supports other development tools that are “open and standard.”

So I was stunned today to see that Steve Jobs, yes the real Steve Jobs, posted his position on Flash in 1687 words, no less:

“I wanted to jot down some of our thoughts on Adobeâ€™s Flash products so that customers and critics may better understand why we do not allow Flash on iPhones, iPods and iPads. Adobe has characterized our decision as being primarily business driven â€“ they say we want to protect our App Store â€“ but in reality it is based on technology issues. Adobe claims that we are a closed system, and that Flash is open, but in fact the opposite is true. Let me explain.”

I imagine that this uncharacteristic post was fueled by Adobe’s stature in the tech industry’s pecking order, and the loud industry criticism Apple endured for its unilateral decision to vanquish Flash from its core iProducts.

Whatever the motivation, I am pleased and encouraged that Apple’s leader took a page from Google’s PR playbook to address an issue of vital importance to its business. Now watch the fallout. I’m hopeful that Mr. Jobs’ little conversation starter won’t end here.