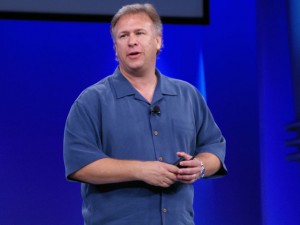 Rather than properly preparing their executive to deal with the most expected of questions, the Starbucks-fueled Apple PR staff swarms on the unassuming British TV reporter, with cameras still rolling, to demand a journalistic detour under the snarky threat of postponing the interview altogether, e.g., “we’re very busy today.”

What’s surprising is that the executive in question, Phil Schiller, Apple Senior Vice President of Worldwide Product Marketing (pictured), looked like a deer in the headlights when the reporter asked him about the iPod and iTunes duopoly. I mean is this a question that hasn’t come up previously?

No matter. When it did, he simply gave his handlers the “gee I didn’t expect this” look, a signal for them to physically insert themselves between himself and the inquiring journalist.

Phil, a simple acknowledgment and lighthearted quip like “Sure. iPod and iTunes have the dominant market share because those that use them love them. They’re simply great products. And sure, they go together like peanut butter and jelly.”

Clearly, your PR staff could have armed you with something better than, “give us the nod and we’ll give him the boot!”