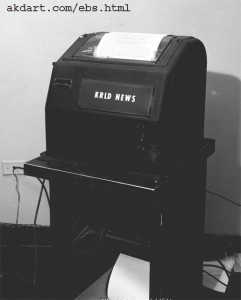 Did you ever have a client ask you to contact an AP reporter to learn which news outlets picked up a story in which the client company was featured? If you are asked, politely decline and offer instead to use some of the off-the shelf monitoring tools, starting with Google News, that scrape and index online content. (Refrain from calling your client an idiot.)

Of course, with bloggers freely borrowing and remixing original AP reporting in their editorial output, one may never attain a complete accounting. If the AP had its druthers, that free and unfettered use of its content (i.e., its “intellectual property”) will soon follow the teletype machine into oblivion.

“ThomsonReuters has been public in its views on the evolving online news industry, often times in disagreement with other big name publishers on issues like aggregation. On Reuters.com, its primarily ad-supported consumer news site, it encourages bloggers and other news sites to link to our content. ‘Simply put, we [ThonsonReuters] believe in the link economy.'”

New York Times‘s executive editor Bill Keller recently shared his perspective on web journalism in a response to a substantive piece that appeared in the New York Review of Books. From Keller:

“Thankfully my job does not require me to know the future, but I suspect the journalistic landscape five or ten years from now will be a mix of survivors and start-ups, and that the distinction between mainstream and new media will diminish from both directions. I think traditional news organizationsâ€”including the Times but also many othersâ€”will continue to evolve. We will survive in print as long as the revenues justify it (and, thanks in part to growing circulation revenues, they still do) but we will grow, adapt, and ultimately prosper on all manner of nonprint platforms.”

Propelling a story to go viral remains a core deliverable for PR (and marketing) pros charged with building a positive branded presence for clients in the mediasphere. In the early days of satellite-delivered, privately-produced video news feeds, we would attempt to extend a local TV news story’s reach by pitching the respective network affiliate news feed service (ABC News One, NBC NewsChannel, CBS NewsPath) on the story’s national news value. It was these syndicators’ jobs to determine whether a local news package would play outside of Peoria.

And then there were the ad hoc networks of local TV affiliates. Minneapolis-based Conus or Group W come to mind. At its height, Conus had some 80 local TV affiliates — from all three networks — sharing news content via twice-daily satellite feeds. Conus, coupled with CNN’s own content-sharing feed to disparate network affiliates, increased the likelihood that two competing stations in the same market might air the same reporter’s package.

Today, with a cacophonous mix of news mediums, loose affiliations, and linking, lifting and re-tweeting by bloggers and microbloggers, the path to broad, national exposure is circuitous indeed. Top-down, bottom-up and side-to-side story-seeding, in combination, may serve as the only recourse for those of us striving to build a redeeming branded presence for clients.

On the subject of cross-medium, content-sharing scenarios, today I learned of a significant initiative by News Corp to aggregate and share news content across all of its media properties. The Guardian reports:

“The service, called NewsCore, will operate like a global wire service for all the company’s newspapers, TV networks and websites. News Corp is describing the venture as a “21st-century multi-media information service that will draw on the worldwide news and sports resources within News Corporation and make them available to other News properties everywhere.”

The New York-based service will be headed by John Moody, the former executive vice president of news editorial for Fox News who will “help coordinate editorial assets.” Joining Moody in the venture are Mike Gutch, a former vice president finance at News America; Adam Birnbaum, technology and data executive; and Scott Norvell, formerly the Europe bureau chief for the Fox News.

As far as I know, this is the most ambitious, if not the first intra-aggregator and syndicator of news content across a single, multi-channeled media enterprise.