We’re in the midst of another one of those mindboggling weeks in New York City for anyone toiling in the PR, marketing, media, and digital arenas. So much to see. So much to do. FourSquare check-ins are swarming. It’s Internet Week! 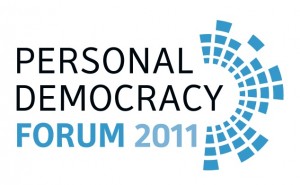 Of course, working stiffs need to be judicious about the events they choose to attend. This stiff has a personal penchant for the intersection of politics and technology, and thus chose to audit the opening day of Andrew Rasiej and Micah Sifrey’s Personal Democracy Forum. (Thanks #PdF11’s PR rep Justin Kazmark).

I brought along my #2 son who just finished college as a Government & Economics double major and will start his SF-based job as a financial analyst in the Tech-Media-Telecom sector in July. Right up his alley.

We chose two sessions. The first, titled “Newsing the Live Web,” featured a panel with two of the most influential and prolific users of Twitter – The Times’s Brian Stelter and NPR’s Andy Carvin – who sat alongside Columbia College (of Chicago) professor Dan Sinker. Sinker achieved Twitter fame (and a book deal) for his profane and lyrical portrayal of @MayorEmanuel on Twitter leading up to this past winter’s Chicago Mayoral election.

ABC (Australia’s) Peter McEvoy rounded out the group. He shared video of a live news conference with former Prime Minister John Howard (sitting before a real-time Twitterstream). Things got interesting when an anonymous Twitterer suggested throwing a shoe at Howard, and it happened. Moderating was the inimitable former New York Timeswoman and world-traveling bon-vivant Jennifer 8. Lee who recently joined the board of the Center for Public Integrity.

Stelter’s “newsing the live web:” epiphany occurred when his employer decided to feed his tweets on the home page of NYTimes.com during his on-site coverage of the devastation in the wake of the tornadoes that swept through Joplin, MO.

His only frustration was in his inability to personally follow-up with those who followed, commented and re-tweeted his micro-dispatches from the field. He faulted Twitter for not archiving older tweets.

Carvin talked about his migration from NPR’s social media maven, charged with building stronger bridges between NPR and its audience, to his current role as a full-time and credible curator of all things Twitter emanating from the Arab uprising in the Middle East, starting with Tunisia. At the height of the Egyptian revolution, he put out some “1400 tweets a day.” He noted: “I have zero staff helping me out. My tweeps have my back.”

Carvin sees his role less as a “human newswire,” but more as “anchor coverage.” He’s now back to 400+/- tweets/day and his bosses have asked him to further develop this new real-time “news” vein he so effectively tapped over the last several months. From the audience Craig Newmark suggested that Mr. Carvin put to prose his entire experience chronicling the Arab Spring. Good idea.

The second session we attended was simply billed as a “Deep Dive” with two of today’s most important contributors to the digital revolution. They are Doc Searls and Dan Gillmor, authors respectively of two seminal books that left a profoundly personal and professional impression on this blogger: The Cluetrain Manifesto and We the Media.

In the audience were other thought-leaders including Google’s Bob Wyman, Salon.com co-founder Scott Rosenberg, NYU professor Jay Rosen, Kevin Marks, Tummelvision.TV’s Deborah Schultz and many others I didn’t recognize.

The conversation covered the gamut with Searls insisting that we are still at the very early stages of the Internet revolution. He said that “Facebook, for all the good it does, is AOL 2.0.” He also railed at marketers for their insidious tracking of consumers (as covered in that Wall Street Journal series): “…cookies from websites follow you around the internet like sniffer dogs after your scent…online, users have no more power than sites give them.”

Gillmor opened by talking about transparency in journalism, and observed that mainstream news organizations have really never been transparent. They don’t reveal how they make their sausage. “How we do it is our business.” He did acknowledge mainstream outlets who took the time to explain how they did their journalism as part of their news package.

I took the liberty to ask about what I perceive as the waining influence of mainstream news organizations to effect regulatory or legislative policy shifts. There was a day when the New York Times set the national media agenda, with a hard-hitting story on its front page having an almost immediate and tangible consequence.

The Times remains one of the world’s most influential news organizations, but how have other watchdog mainstream media fared in this splintered, ephemeral news environment when it coms to catalyzing  change?  Gillmor (or was it Searls) did note that a single profound post by someone like Clay Shirky could eventually elicit a thousand in-bound links and exert its own undue influence. (Maybe I shouldn’t be so nostalgic for media as government’s fourth check & balance?)

Someone suggested that at the local level (in Baltimore), hyperlocal bloggers succeed in righting wrongs through their enterprise reporting (which gets picked up by the mainstream).

Anyway, you’ll be able to hear the conversation here. (RT: 54 minutes) The audio is not fab, but the content certainly was…at least for those of us toiling in these trenches.