It’s a new year. The ebullient New York tech community picked up where it left off with several notable events: the first New York Tech Meetup of 2012, a Zaarly-sponsored Startup Crawl, and the auspicious piece in The Economist on Mayor Mike’s goal to see New York City give Silicon Valley a run for its VC money.

First, that Economist piece “Reimagining the Future” in which this paragraph sums up the great expectations the city has at this moment in time:

“The cityâ€™s embrace of high-tech has already begun. Tech clusters have emerged in Manhattanâ€™s Flatiron District and Brooklynâ€™s Dumbo, home to firms like STELLAService and Etsy. Venture-capital firms and angel investors have been looking at New York more seriously than they once did. Henry Blodget, of Business Insider, notes â€œthe financing ecosystem has also gotten very well developed, from late-stage private equity right down to angel investing.â€ Some $1.2 billion was invested by venture-capital firms in New York in 2010. The Big Apple even overtook Massachusetts in venture-capital funding for internet and tech start-ups, making it second only to Silicon Valley. And in the third quarter of last year, it surpassed it in venture capital in all categories. Between 2005 and 2010 employment in New Yorkâ€™s high-tech sector grew by nearly 30%. Google alone has about 1,200 engineers in the city.”

And let’s not lose sight of that audacious announcement that will eventually herald in a new era of technology innovation: the joint plan from Cornell University and Israel’s Technion Institute of Technology to build a $2 billion campus on Roosevelt Island. Here are more details and a flyover:

I did make it to the first New York Tech Meetup of the year, held before (another) sold out audience of 800 or so at NYU’s Skirball Center. The event attracts the dominant share of notables from the city’s tech, academic, media and venture funding communities. I’ve seen former NBCUni chief Jeff Zucker, financier Donald Marron, and entrepreneur Craig Newmark milling in the audience. 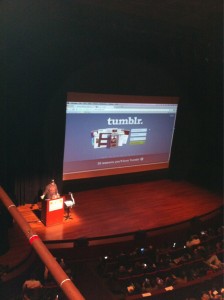 And as you know, the NYTM played host to many of today’s successful tech-driven companies including Foursquare, GroupMe (recently sold to Skype), and Tumblr, which is on fire right now. So much so that moderator Nate Westheimer announced that Tumblr was joining the ranks of Google and Microsoft BizSpark as NYTM’s third “annual sustaining sponsor.” In the news release, company CEO David Karp said:

“Our NYTM demo back in 2007 was a pivotal moment in Tumblrâ€™s history, and weâ€™re really excited to give back to this incredible organization. As Tumblr has grown over the years, so has the NYTM, and we could not be more thrilled to support the monthly meetup as well as the larger mission to promote the NY tech industry. This thriving community has been so welcoming and encouraging through every step of Tumblrâ€™s life, and we’re honored to be a part of it.”

As for the January 2012 presentations, nearly all have some redeeming value, but typically a small handful capture the collective imaginations of this – a most discerning New York audience. Among those that did were:

Deaftel — a very early stage smart phone app for the hearing impaired that allows audio-to-text without operator intermediation. Westehimer noted that it generated a decent share of Twitter buzz, indicating the audience’s growing proclivity for technology that makes a difference in people’s lives.

The next technology (that also makes a difference) was called ObscuraCam. I had a personal interest in this smart phone app that makes it easy to remove meta data from digital images captured while documenting public protests, as an example. Faces and location-identifying objects can be obscured.

The technology’s development was supported by WITNESS and The Guardian Project. For two years, I had handled PR for the Reebok Human Rights Award, which partnered with WITNESS early on to provide much-needed video equipment to activists in countries with media-repressive governments. REM’s Michael Stipe and Peter Gabriel were just two of the rock stars (literal) rock stars who supported the program.

NYTM vet Tara Hunt opened her (show) case for Buyosphere by taking the audience on a search for a pair of shoes that would complement her gold dress. It was soon apparent how frustrating and overwhelming the typical product search can be. With a few filters, Buyosphere’s model taps the crowd, a la Quora, to help surface the exact item one is seeking.  A Google search on Buyosphere reveals the tagline “People helping people.” Right.

In spite of the squeamish similarities to Chatroulette, YouNow proved to be another crowd favorite. It’s a website on which ordinary people (with perceived extraordinary talents) can subject themselves to the scrutiny of the viewing audience.

The audience, for its part, rates the “performance” in real time. The worse the rating, the quicker the proverbial ax. Here’s a short video clip:

Terry Jones of FluidInfo was next up. Brilliant for sure, but perhaps a bit Quixotic in his mission to literally tag verything in ther physical world. Loved the idea. Not sure of its practicality. (I’m still getting over QR Codes.)

And finally, we heard a very cogent and relatable presentation for Chat&, a B-toB startup that offers consumer-facing online retailers the ability for their customers to derive product information from a customer service rep via a live video feed.

To my left, Personal Democracy Media founder and NYTM chair Andrew Rasiej thought there were some potential synergies between Chat& and YouNow (i.e., rate the customer service rep for starters), but Sim, the VC guy to my left and his pal and I debated whether a visual interface (versus text-driven chat) would result in higher conversions.

Finally, I was fortunate to nab a ticket for New York’s first “startupcrawl, sponsored by Zaarly (which had mounted one in SF).  About 40 of us started the evening at (former client) Unigo where the founder of the three-year-old company Jordan Goldman gave a brief overview of his site, the most comprehensive online resource for prospective college students (and their parents).  All the content on the site is student-generated, i.e., it’s authentic.  What’s new there? A service matching prospective students with bona fide college counselors or college students at a cost that’s minuscule compared to the expected going rate.

We then crossed Park Avenue South to check in on everyone’s favorite oenophile turned social media marketing guru Gary Vaynerchuk and his Vaynerchuk Media.  After the group had a few minutes to kibbutz, Gary took the chair, as he’s prone to do, and cajoled the crowd to lose their obsession with that piece in Mashable or how many retweets you’re getting. Stay focused on what’s real and redeemable: your users and customers.  If you do this, you’ll be able to live your dream another day.

I had another obligation, so I unfortunately missed visiting the last three offices on the crawl: Adaptly, Spotify and Zaarly, though I did get a chance to meet some folks from those vibrant startups. All in all, a busy first week of a new year for the New York Tech scene.  Next week, I expect to  make it to the Ultra Light Startup showcase, so keep an eye on this space.