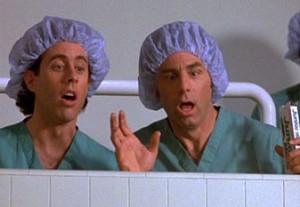 Yesterday, the FCC agreed to re-evaluate how TV programmers inform their viewers of the paid product placements that surreptitiously appear in scripted fare.

It’s one thing for Seinfeld to drop the names of his favorite cult snacks — without a pay-off from the product makers — but quite another for ABC’s Extreme Home Makeover to air an hour-long commercial for Sears and its proprietary product lines like Craftsman, Kenmore, etc. – all with but a fleeting scroll of an acknowledgment in the show’s closing credits.

The issue revolves less around the existence of these products in the programming, especially since technology-driven market forces today mandate new revenue streams across all entertainment channels. Rather, it concerns the way in which broadcasters disclose these paid commercial relationships to their viewers.

“The point of this whole exercise is to clarify what’s required so that viewers actually know who is trying to sell them on something,” said commissioner Jonathan Adelstein, who has been pushing for better disclosure for three years.

The issue of product placement, in which brand-name items are used as props in shows, is not new and has not generated much controversy. It is the practice of insinuating products into actual plot lines, known as embedded advertising or “product integration,” that has raised concern.

Interestingly, the writers of these programs also have taken issue with the commercial fare foisted on their creative output, especially without their getting paid:

The Writers Guild of America West, a union that represents Hollywood television and film screenwriters, wants “real time” disclosure at the time the product is mentioned, like a text “crawl” at the bottom of the screen.

“Since DVRs and other such devices allow viewers to skip or fast forward through opening and closing credits, requiring disclosure at some other moment in the programming will simply not offer adequate protection,” wrote Patric Verrone, president of the organization, in a letter to Martin.

As for PR people, we too learned our lesson that it’s not nice to fool the public. TV news and talk show producers have long since gotten wise to paid third-party “expert” spokespersons who secretly shill for a product or service. Full-disclosure upfront is now (hopefully) a standard PR practice, or at least we hope so.