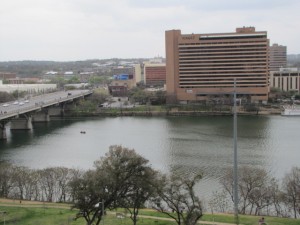 Austin has its many charms as a city. Not unlike Cambridge/Boston, it has a river running through it with rowers in unison gliding their skiffs under its bridges. The architecture is a mix of the modern and gritty. Some have compared it to Tribeca but without putting a gaping hole in your wallet. 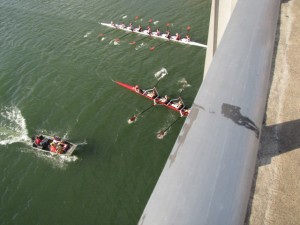 To this end, our NYC friend Soraya Darabi and her colleagues at Foodspotting teamed with Blackberry for a Street Food Fest where a hand-selected sampling of these mobile restaurants served up a super-delicious artery-clogging helping of southwest fare. From the look of the queue, the Korean BBQ Tacos (who knew?) emerged as the clear crowd favorite.

As hard as it is to get your arms around all that is SxSW, the best way to do so is by foot or pedicab. At left is my favorite pedicab siting just outside out hotel.

I also happened by the Gowalla Airstream where the #2 location-based social network was giving out t-shirts and a pass of some kind. 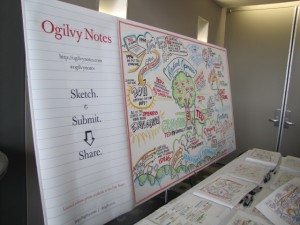 Inside Austin Convention Center (aka SxSW Ground Zero) where one can easily be awarded with the Super or Super Duper Swarm badge on Foursquare, I couldn’t help but notice the “Ogilvy Notes” booth on the third floor. Not sure what I was looking at, I was drawn in by the colorful illustrations and keywords that appeared to reflect the conference. I quickly took this shot and dashed off to my next session.

That night I bumped into my old pal Rohit Bhargava at the Mashable party who explained that Ogilvy’s illustrators attended the key sessions and produced these artistic renditions (i.e., data visualizations) from what they heard and saw. Wouldn’t Wordle do? I asked Rohit. He said there’s nothing like a human touch.

SxSW attendees are quite used to standing in lines. Every hot party, A-list speaker event and taco stand teaches one the true meaning of patience. I came across this nondescript line in the middle of the city over the weekend. No signage, except for one that read Gold’s Gym.

Hmmm. Geeks heading onto Gold’s Gym??? I sauntered over, and there it was: an Apple pop-up Store selling nothing but the iPad 2! A bit later, my Social Media Week NY PR collaborateur Andy Morrisinvited me to a private pool party to help his client Conduit make a media splash. 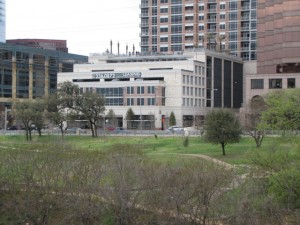 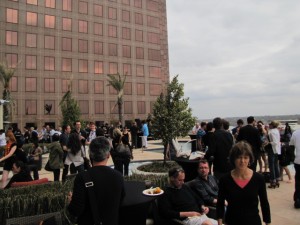 It was held at a fab rooftop venue. (Atop the white building at left.)

Lots of New Yorkers on hand including the four media types in the hot tub below: (left to right: Mediaite’s Rachel Sklar, The Times’s Brian Stelter, Fashionism.com founder Brooke Moreland and prolific chronicler of all things social (as in parties) Nick McGlynn.

Anyway. more on these pages shortly on the two keynotes I attended featuring IAC’s Barry Diller and a tete-a-tete between Pete Cashmore and Dennis Crowley.