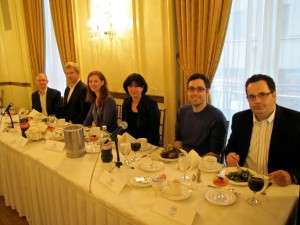 There was some trepidation among a few of us on the board of the Publicity Club of New York. Would a session on the very vogue and increasingly significant (to PR peeps) “Local/Hyperlocal Media” market be a draw?

Yesterday we learned the answer. Nearly 100 PR pros turned out on an unusually cool, misty May day in New York City to hear a panel of five senior news executives and one influential industry reporter share a useful and eye-opening overview of this trend that’s sweeping both established media companies and small start-ups. The panelists, pictured above, included (left to right):

Mr. Safran, who posted his thoughts on PR peeps and the luncheon, shared his definition of “local,” “hyperlocal” and “niche” media:

“Niche” goes this way: we are going to cover bicycling in New York. We’re going to have a great cyclist blog. I’m singularly stunned that there haven’t been more of these attempts.

From my perspective, the PR engagement of editorial gatekeepers at hyperlocal, and to a lesser extent local sites may not scale as readily as engaging those at more mass audience outlets, yet the opportunities are aplenty for those with strong locally relevant hooks. 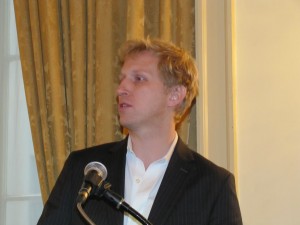 AOL Patch’s EIC Brian Farnham (at left), for example, told us that each Patch site has but one full-time local editor responsible for the day-to-day construct of the site’s daily content. Hence, there is room for third-party submissions and even DIY consumer-generated content, but again, only if it’s pertinent to the local interests of the community, and it’s not overly commercial.

There is no single model for content creation at the local or hyperlocal level. Rather we’re seeing a mash-up of sorts that includes original reporting, local government data, third-party aggregated stories, consumer-generated or crowd-sourced submissions, and even experiments involving college students. 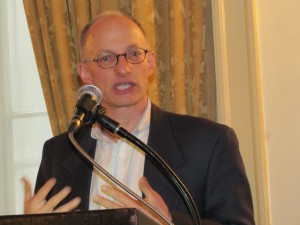 For the latter, Jim Schachter of The New York Times (at right) reports that The Local’s newest site covering NYC’s East Village is a collaboration with Jay Rosen’s students at NYU, and may make its debut in August.

We didn’t get into too much detail on the business models that will sustain local or hyperlocal media, suffice to say that one panelist recalled reading Patch’s business plan, which targeted those old-school community daily and weeklies. You know, those papers on which the “mat services” have prospered from the PR industry all these years.

As for ad revenue, I had my client PaperG in the audience, which has locally focused technology that automates the creation, sales and management of custom display advertising enabling local online publishers to (finally) capture those elusive small businesses in their communities.

You can hear an audio file of the full 75-minute panel discussion here. I will also post it to the section of the PCNY website that houses audio from the club’s previous panels.